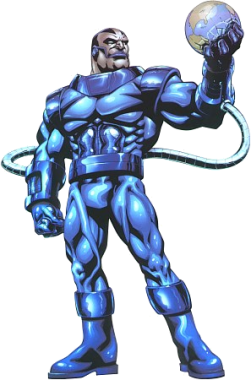 Apocalypse (En Sabah Nur) is one of the prominent foes of the superhero group the X-Men. An immortal born over 5,000 years ago in ancient Egypt under the name En Sabah Nur, upon entering an alien space-craft he was forever altered into something beyond mutant. After his mutant power awakened and taking the name of Apocalypse, he has throughout the centuries dedicated his existence of remaking the world to fit his extreme Social Darwinist eugenic philosophy: only the fittest have the right to survive — and he gets to define who is fittest.

In the late 20th and early 21st centuries AD, when mutants became a sizeable part of the human population, Apocalypse would become most active, seeing it as a perfect time to effect his goal, viewing mutants as the stronger race that is destined to inhabit the world instead of humankind. Evidently, this would bring him into conflict with the X-Men, and they would find themselves involved in various schemes of his and battle his often accompanied servants, the Four Horsemen of Apocalypse (a nod to the Horsemen of the Book of Revelation, and named after each). The posing threat and determined goals of Apocalypse, have almost lead to the total annihilation of the world in story arcs such as The Age of Apocalypse and The Twelve, making him a feared, dangerous, and perhaps most powerful opponent of the X-Men.

Apocalypse appears as one of the boss of X-Men vs. Street Fighter and Marvel Super Heroes vs. Street Fighter. He appears initially as a large character on the same scale as the other playable characters, but then grows to an enormous size after screaming "I AM THE APOCALYPSE!!!", far too big to fit on a single screen. His main weapon is his gigantic fist, which can turn into various weapons (such as a drill or mace) that do major damage when it strikes the player's character. His weakest point is his head, although flying attacks must be used to attack it. It was revealed that Apocalypse captured Akuma and transformed him into a cyborg with incredible power, which made him extremely difficult to defeat.