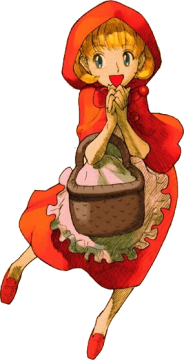 Baby Bonnie Hood (known as Bulleta in Japan) originally appeared in Vampire Savior, third installment of the Darkstalkers series. In addition to appearing in Marvel vs. Capcom 2, she also appears in the Neo Geo Pocket Color version of SNK vs. Capcom: The Match of the Millennium.

Baby Bonnie Hood bares a striking resemblance to the children's folktale of Little Red Riding Hood. She appears extremely cute and exuberant. She is accompanied by her faithful dog Harry, and a trio of butterflies. This sweet exterior hides the mind of a killer. She doesn't kill people, but she lives for the thrill of hunting Darkstalkers... especially when it results in a huge bounty. As a result, she hides a complete arsenal of weapons beneath her cloak; everything from uzis, machine guns, land mines, knives, and molotov cocktails. She will even go so far as to use her basket as a deadly weapon.

Her attacks are often made to look like the results of innocent accidents, lending to the humor of this character. Most of her attacks make the transition from Vampire Savior with little change. She gains a new horizontal (upward) version of Cheer & Fire (the original always fired down) and the downward version has better range. Her dashing Hard Punch attack is no longer overhead, and she lost one command throw. Her Malice & Mine move is more defensive. In general, her two existing Hyper Combos are slightly improved, although Beautiful Memory is no longer invincible at the start. Her Apple For You Hyper Combo has been enhanced and has much better range.