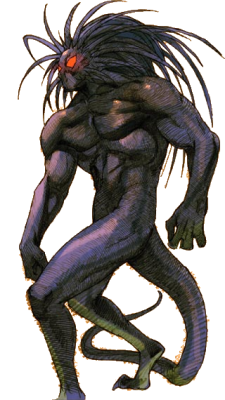 Blackheart is a demon. He is the "son" of the demon-lord Mephisto (whose true appearance looks very much like a devil), and the archenemy of Ghost Rider. Centuries of murder in a locale named Christ's Crown drew the attention of Mephisto, who created Blackheart, from the energy of the accumulated evil. Blackheart explored the nature of evil under his father's tutelage, clashing with and failing to corrupt Daredevil and Spider-Man.

Later, in an attempt to be free of captivity, Blackheart made contact with Misha from the group Warheads and became the source of her pre-cognitive visions. Eventually Misha's squad, Kether Troop, invaded Hell itself and freed Blackheart, who was temporarily in the disguise of Doctor Strange. Blackheart would return to Christ's Crown and tempt Ghost Rider, Punisher, and Wolverine to the town itself in an attempt to corrupt them. The group would eventually follow Blackheart back into his own realm for a final confrontation.

Blackheart is a powerful demon of the highest order, and possesses vast supernatural powers; incalculably high superhuman strength, speed, and endurance which are magical in nature; telekinetic and telepathic powers; change the size and physical form of himself; enter and leave different planes of existence and dimensions at will; heal himself at the molecular level; the ability to generate various forms of energies for destructive purposes. Unlike his father, he can capture a soul against the will of the person he is stealing it from.

Mephisto is the father of Blackheart. Mephisto's moves are identical to his son's, but most of his regular physical attacks will set an enemy on fire, causing a minor amount of extra damage.