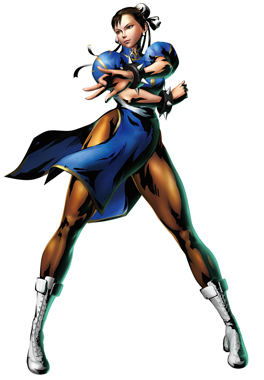 Chun-Li is the only other character besides Ryu and Zangief to appear in all four Vs. games. Although she normally appears in her SF2 outfit, she can also be selected in her SFA jumpsuit in X-Men vs. Street Fighter. She even has a secret altered form in Marvel vs. Capcom called Shadow Lady. This character supposes what would happen if Chun-Li was captured and experimented upon the way Charlie was when he became Shadow in Marvel Super Heroes vs. Street Fighter. She appears darker and appears to have robotic parts that she attacks with, along with altered Hyper Combos.

Chun-Li receives similar augmentation to her moves as a result of traveling to the Marvel Universe. While her Kikouken isn't very much altered, her signature 100-Kicks move (Hyakuretsu Kyaku) is far more animated and can be executed within a dash allowing the move to be more offensive in nature than defensive. Her rising kick attack Tenshoukyaku sends opponents much higher into the air, and her Sen'en Shuu also rises higher and has more of an arc than in the Street Fighter Alpha series.

She still retains her agility and aerial superiority. She is one of the few characters who can jump, not once, but twice in mid-air. She can perform a dash in mid-air as well. She also retains the ability to jump off of walls, and use her Yousou Kyaku head stomp move multiple times. Among her Hyper Combos, her Kikoushou has been incredibly enhanced, producing a globe of energy slightly larger than herself, capable of sucking opponents in for massive amounts of damage. The remaining Hyper Combos are more flashy to watch, and produce more hits as well.