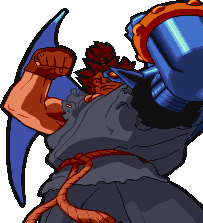 At the end of X-Men vs. Street Fighter, after Apocalypse had been defeated, one fighter remained behind and lurked in the shadows, biding his time and waiting for the right moment to strike a foe that he thought would be worthy of his fighting ability. After waiting for Apocalypse to heal, Akuma announced his intention to fight him. Apocalypse grinned, and Akuma prepared himself for battle. Then Apocalypse pushed a button on the control panel nearby, and a glass tube suddenly dropped down from the ceiling, trapping Akuma inside. Enraged by being denied the opportunity to do battle, he rage against the tube, but could do nothing to break the glass.

Completely under Apocalypse's control, Apocalypse was pleased to have a specimen from the Capcom universe to operate and experiment upon. In time, Apocalypse learned about the Satsui no Hadou that drove Akuma's fighting spirit, and developed technology that could tap into and hone Akuma's brutal rage. Akuma was put to sleep and when he awoke, he found parts of his body replaced with bionic part, including the addition of two metallic wings, similar to the ones that Apocalypse gave to Angel of the X-Men, turning him into Archangel. With Apocalypse's creation ready for battle, he once again took on combined forces, this time of several Street Fighters as well as many Marvel Super Heroes, not simply the X-Men. When the forces defeat Apocalypse a second time, all that they found waiting for them... was Cyber Akuma.