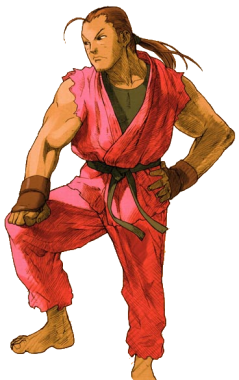 Dan was pulled into the Marvel Universe during the events of Marvel Super Heroes vs. Street Fighter quite by accident. In addition, he misinterpreted his presence in the Marvel Universe as a fan demand generated by his "immense" popularity. As a result, Dan felt that he should fight in order to please the crowds of people who would turn up to see his spectacular Saikyo-ryu style of fighting. Before the first fight took place, Dan made sure to go to a local photography store and get a number of head shots developed so that he could autograph them and give them to his fans, and perhaps even one or two for his opponent, since they would naturally want one to remember the occasion.

Despite that fact that most Street Fighters experienced an augmentation to their powers (finding it easier to tap into their fighting ki and produce more spectacular results), Dan's power did not augment to any great degree. In fact his self-taught Gadouken still has a pitiful range, dissipates quickly, and is even smaller than it was in the Street Fighter Alpha series. Dan still has more ways to taunt than any other fighter and, can do them infinitely many times throughout a match. Most of his Hyper Combos have remained the same, although his Shinkuu Gadouken has at least grown in size and has slightly better range than usual. Dan does gain one Hyper Combo, and it is a move that he has taught to himself after witnessing Akuma perform the Shun Goku Satsu move on an opponent. Naturally, Dan doesn't get it quite right. The Otoko Michi move is unblockable, but it can be Tech Hit out of. If it does connect, it doesn't do a tremendous amount of damage to the opponent, and actually leaves Dan with a single sliver of health for the remainder of the match! Which this move is not that useful in MSH vs. SF, it does gain a significant amount of damage capability in MvC2, making it one of the strongest supers in the game (although it still knocks Dan down to one pixel of health).

Dan has a secret entrance in both games. If Dan is your first fighter and you hold Light Punch before the round begins, Dan falls to the ground from offscreen, and his sandals fly into the air and disappear. In MSH vs. SF, this was accompanied by an explosion, but the explosion is absent in MvC2.