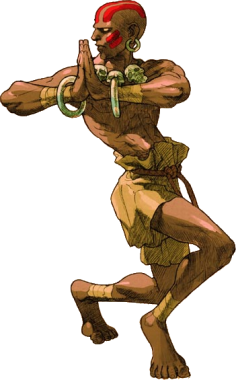 When Dhalsim arrived in the Marvel Universe, he literally marveled at the similarities between their worlds can cultures. Yet he could sense that a great evil presence was dominating the landscape, and his explorations of this new world would have to be held off until the evil had been dealt with. In the initial X-Men vs. Street Fighter conflict, Dhalsim was the sole Street Fighter who volunteered to team up with Sabretooth, much to Sabretooth's disappointment. However, Sabretooth was soon impressed with Dhalsim's unusual fighting ability, as well as Dhalsim's tendency to talk to him and treat him like a normal person.

Dhalsim's powers were slightly augmented in the Marvel Universe. He found that the size of Yoga Fire that he was capable of blowing was quite larger, and his continuous Yoga Flame attack grew in length tremendously. Beyond that, he did not receive any additional powers right away. Between the events in XM vs. SF, and MSH vs. SF, Dhalsim taught himself how to manipulate his Yoga abilities in the Marvel Universe to allow him not only to levitate himself, but to literally fly through the air. From there, it was a small matter to learn how to use this ability to dash through the air. This greatly added to Dhalsim's ability to keep his opponents at bay by attacking from a distance.