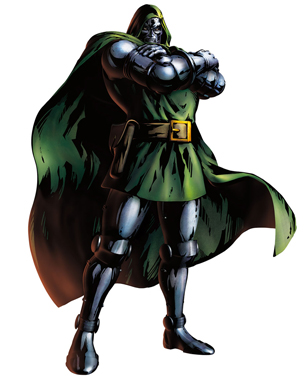 A brilliant scientist, Doom was once a classmate of the Fantastic Four's Reed Richards. However, he became embittered by facial scars received from an experiment gone wrong, a failure which he attributed to Richards, beginning's Doom rivalry and obsession with the Fantastic Four leader. His ruling of the small Balkan nation of Latveria provides him with diplomatic immunity. Doom is considered the archenemy of the Fantastic Four, but has also been added to the rogue galleries of the Avengers, the Silver Surfer, the Hulk, Captain America, the X-Men, Nick Fury, Iron Man, and Spider-Man, among many others. Doom has also faced villains like Magneto and Venom.

Victor Von Doom was raised by gypsies in a small European county called Latveria. He lost both of his parents at a very young age. Swearing revenge, Victor began to increase both his scientific and mystical knowledge with such determination that he was given a full scholarship to Empire State University. It was at ESU that Victor met Reed Richards and Ben Grimm, and where he started his extradimensional research. Doom's vanity prevented him from adjusting the schematics to one of his experiments, and the end result was an explosion that scarred Victor for life. Expelled from school, Victor began to travel the world, eventually stumbling upon a village of Tibetan monks who trained him and crafted him a suit of body armor, complete with face plate. He soon returned to Latveria, overthrew the government and crowned himself King. Ruling with an iron fist, Doom began to turn the resources of his small nation to his plans of world domination.

Dr. Doom's iconic iron-clad face is a part of his high-tech, nuclear powered, computer assisted battle suit. While in his armor, Dr. Doom can lift (press) approximately 2 tons. He is one of the smartest men in the world and has an almost endless variety of weapons and equipment at his disposal. At the very least, Doom's armor contains a force field and concussion beams -- though more weapons may also be included. Dr. Doom also has the ability to switch minds with another person and he possesses a small amount of mystical knowledge as well.