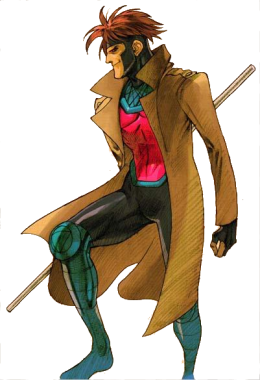 A mutant, Gambit possesses the ability to manipulate kinetic energy as well as limited hypnosis. He is also skilled in burglary, the use of a Bō, card throwing, and hand-to-hand combat. A professional thief, few X-Men trusted Gambit when he first joined the group, a source of stress between him and his longtime on and off again love interest Rogue. This was exacerbated when his connections to villain Mister Sinister were revealed, although some of his team members accept that Gambit honestly seeks redemption. The X-Men's self-described ladies man, Gambit has shown a more vulnerable side of himself over the years, especially when it comes to Rogue, his love. Gambit remains fiercely proud of his Louisiana heritage, and speaks in a very thick New Orleans, Cajun accent.

Gambit's mutant ability allows him to charge inanimate objects with unstable kinetic energy. This usually causes the object in question to detonate after a controlled time restraint. Gambit is skilled in card throwing and all aspects of thievery. One of his trademark tricks is to hurl playing cards at an opponent, charging each card and turning it into a deadly projectile. One of Gambit's most powerful attack consists of charging a whole deck of cards and hurling them at an opponent.

Gambit's power also provides him with near-superhuman agility, and creates a static interference making him immune to telepathic probles. Gambit often wields a telescopic metal staff, and is highly trained in martial arts, particularly the French kickboxing martial art Savate. Possessing all the physical attributes of a human body naturally evolved for constant motion (as a side-effect of having bio-kinetic mutant powers) coupled with his Thieves Guild training, makes him a superhumanly acrobatic and athletic fighter. Gambit possesses a subtle hypnotic charm. He can compel people to believe what he says is true.