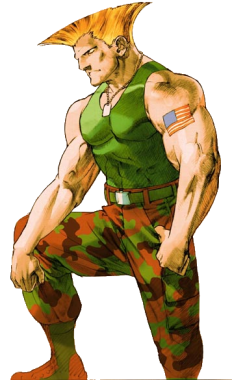 Guile remains laregly the same as he was in Street Fighter Alpha 3, but he does pick up a few new techniques as a result of finding himself in the augmented universe. For one, he gains the ability to perform the Somersault Kick, not only on the ground, but also in mid-air, and without the need to charge it up at all. Furthermore, he gains an additional Hyper Combo. Crossfire Assault is an automatic combo if he connects with his opponent. His Sonic Hurricane super is much improved and can be a rather devastating attack to use against opponents. He is loaded with a number of command attacks, all of which are cancelable, which makes him a very versatile character to use.