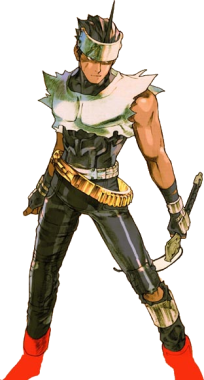 Hayato Kanzaki is originally from the Capcom 3D fighting games series Star Gladiator and its sequel Plasma Sword. He is a bounty hunter from the year 2348, and fights using a plasma sword. He is the hero of the Star Gladiator games, and similarities have been drawn between him and Luke Skywalker. Hayato was abandoned by his parents at a young age and was found wandering the streets of Neo-Tokyo by the owner of an orphanage. Se raised Hayato along with many other disadvantaged children but in doing so fell into debt. In adulthood, Hayato's sole purpose became to get her out of the debt that raising children put her in. He reluctantly became a bounty hunter but his strong sense of justice eventually turned him off of the profession completely, which frequently lead to criminal behaviour. He believed his money problems would be solved by the large reward for joining the 'Star Gladiator' project.

Many of Hayato's attacks have been converted directly from his original 3D Star Gladiator series to the 2D gameplay of Marvel vs. Capcom 2. Capcom ported over Hayato's Plasma Combos, and they're pretty powerful. You can cancel out of the attacks into specials or Hyper Combos. The kick attack in the Plasma Combos must be blocked low, while the last hit of the 'Kegon' combos is an overhead and must be blocked high. For the 'Kegon' combos, pressing LP after the last horizontal slash makes Hayato do a jumping attack—it will miss if you time it too late. Straight from Plasma Sword comes Hayato's Plasma Field HC. This move does a small amount of damage, and if it hits, Hayato will start flashing blue. For a limited period of time, he has infinite super meter energy, and can even use his Level 3 Black Hayato move repeatedly. However, he can't use his Plasma Field while discolored, nor can he use a Variable Attack or Variable Combination. He can still switch out with a Variable Counter, but in that case the Plasma Field bonus ends. This move can be blocked, but is still considered 'activated' if you hit someone with Super or Hyper Armor. The Black Hayato Hyper Combo allows Hayato to tap into an evil variant of himself to perform a Shun Goku Satsu type move for massive amounts of damage.