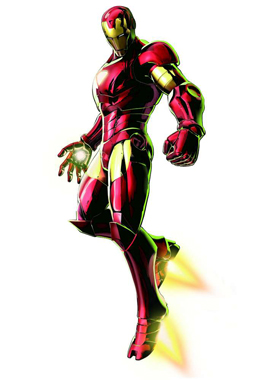 Iron Man (Anthony Edward "Tony" Stark) possesses powered armor that gives him superhuman strength and durability, flight, and an array of weapons. The armor is invented and worn by Tony Stark, an American industrialist billionaire and military contractor known not only for his lifestyle, but also for his incredible inventive genius. First created to assist his failing heart, it has become a source of aid for his damaged nervous system. Iron Man has frequently fought evil-doers as a member of the Avengers.

Iron Man's powers and abilities derive from the advanced powered armor that he wears. The armor is pliable, yet capable of great resilience and protection. The suit is powered by a combination of solar converters, electrical batteries and an on-board generator that uses beta particle absorption as a fuel source. The suit is also able to convert nearby energy sources, such as heat or kinetic energy into electricity, or even drain electrical energy directly into the batteries for recharge. In addition, the suit can be completely sealed for operations in vacuum or underwater, providing its own life support, and is shielded against radiation.

The weapons systems of the suit have evolved over the years, but Iron Man's standard offensive weapons have always been the repulsor rays that are fired from the palms of his gauntlets. Other weapons built into various incarnations of the armor include the uni-beam projector in its chest; pulse bolts that pick up kinetic energy along the way, so that they hit harder the further they have to travel; an electromagnetic pulse generator and an energy shield. Other capabilities include generation of ultra-freon, creating and manipulating of magnetic fields, sonic blasts and a holographic generator to create decoys.