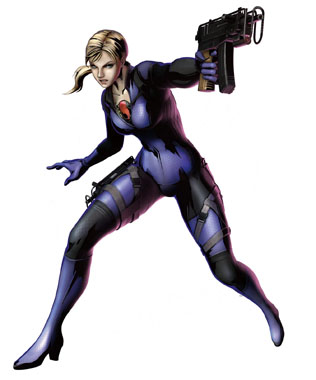 Jill Valentine is a character from the Resident Evil survival horror series. She is one of the protagonists in the original Resident Evil, where she is introduced as a member of the Special Tactics And Rescue Service, part of the unit's Alpha Team. She is in charge of rear security and specializes in bomb disposal (an ability she acquired as a Delta Force operative). She returned as the protagonist in Resident Evil 3: Nemesis, where she was no longer a member of S.T.A.R.S., merely a citizen trying to survive the viral outbreak in Raccoon City.

Jill appears in Marvel vs. Capcom 2 as a playable character. She comes equipped with all her trademark weaponry from Resident Evil. As special moves, Jill summons incoming monsters, such as zombies, zombie dogs, and crows, leaving her opponent to deal with them. She can also use a rocket launcher as a Hyper Combo. In another Hyper Combo, the Tyrant appears and slashes Jill's opponent relentlessly and as a hidden command, she can pull out her rocket launcher and blast the Tyrant, causing additional damage to her opponent. Although the command only uses one Kick button, it still costs a full level to use. If summoned as a support character, she'll appear to provide a green herb, a common healing item in Resident Evil for the player's active character. On occasion, she will provide a green and red herb which will heal even more damage than the green herb.