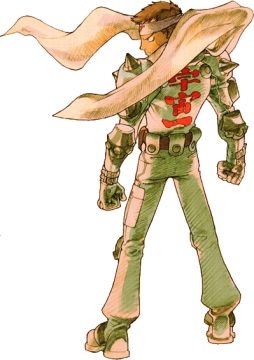 Jin Saotome is originally from the mecha fighting game Cyberbots: Full Metal Madness. Ken Saotame, Jin's father, was a war hero, who lead a team of elite Variant Armor pilots against an Earth Force experiment that went wrong, saving the world. However, he was killed shortly after. Jin took on his father's Variant Armor Blodia BX-02 and continues the fight while investigating the mystery of his father's death in which the Earth Force cover up the events that happened one year ago. Jin feels the only way he could live up to his father's legacy is to become not only the best VA pilot ever, but also to develop his mind and body to its limits. His mood swings from stoic and introspective to raging fury with little warning as his rage over his father's death takes over.

He appears as a distinct fighter in Marvel vs. Capcom, and its sequel, where he implements Blodia in several of his special moves. In both games, he plays relatively the same, utilizing simplistic but effective short-range tactics to dispatch his opponent. When Jin is the last surviving character and has less than 25% of his total life gauge (this includes recoverable damage), he will pose for a moment at his first opportunity to stand still. Once he poses, he will start glowing. While glowing, he has Super Armor while on the ground. His attack power also increases, just as if he'd gotten a Power Up Orb from Ruby Heart. Jin can ignite himself on fire during his taunt by tapping any punch or kick button after taunting. Though Jin is immobile during this move, the fire can still hurt an opponent if they touch it.

Jin also appears as an unlockable hidden character in another Capcom mecha fighting game, Tech Romancer. On Jin's costume, there's a Japanese kanji written on his back, which reads uchuu ichi (宇宙一). This literally comes out as "space one", but more likely means "number one in the universe"