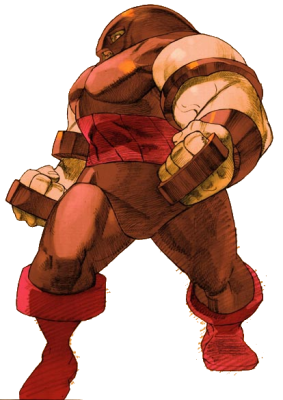 Juggernaut is the half-brother and childhood bully of X-Men founder Charles Xavier. Unlike Xavier, Marko is not a mutant. With the Crimson Gem of Cyttorak Marko was granted power rivaling the Hulk and Thor, and embarked on a lengthy criminal career as the Juggernaut, often tangling with his step-brother’s team, the X-Men. Despite his great power and the potential danger that he poses to the X-Men, he has used his abilities in a form that characterized him more as a petty thug than as a super-villain. Unlike Magneto, Mister Sinister, or Apocalypse, who devoted themselves to an ideology, Juggernaut's motivation was primarily greed. During his criminal career, the Juggernaut amassed a notable amount of wealth.

Because of his association with the X-Men, Juggernaut is often mistakenly labeled a mutant. Juggernaut is in fact a magical avatar changed by the Ruby of Cyttorak. The ruby bonds to his soul and alters his being, giving him physical powers exceeding those of most 'Homo Superior.' Juggernaut traditionally possesses vast power of mystical origin, has immense strength, tremendous resistance to physical injury; a nearly impenetrable force field that he could summon at will, unlimited stamina, and alleged immunity to molecular manipulation attacks.

Due to the mystical energies flowing through his body, he does not need to eat, breathe or drink. Finally, while moving he has proved essentially unstoppable, except by some very few, vastly powerful adversaries. Juggernaut has also been injured on occasion, but has an extremely powerful healing factor, and can apparently recover from almost any damage.