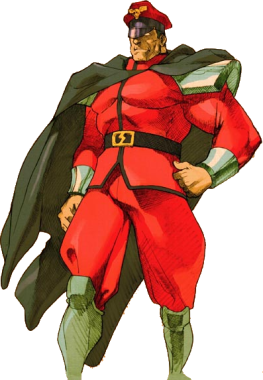 The process that selected among the most powerful Street Fighters from the Capcom Universe was not selective over a fighter's capacity for good or evil. Thus, M. Bison was one of two representatives of his underground Shadowloo army, the other being his "Killer Bee," Cammy. At first, Bison was quite disturbed about being forced to answer a summon to another universe beyond his control. Yet the instant he set foot in the Marvel Universe, he could tell one thing was different right away: His Psycho Power could reach new limits in this altered universe. Whereas he had to concentrate a lot to perform many of his Psycho attacks in the Capcom Universe, he found that they came out much more effortlessly. He even realized an increase capacity to fly through the air at will.

Sizing up the competition when looking for a partner, he initially considered stick with Cammy. However, one look at Magneto made M. Bison feel that he had met an equal in the ambition for world domination through strength. Naturally, he sought an alliance with this powerful mutant, with every intent to turn on him when the best time presented itself. M. Bison and Magneto were secretive to one another, but they posed as a sizeable threat to the other teams. At the very end of the events in X-Men vs. Street Fighter, M. Bison began fighting Magneto. They were interrupted by Charlie who arrived in order to arrest M. Bison and bring him back to the Capcom Universe to answer for his crimes. Magneto attempted to attack Charlie, and M. Bison knocked Magneto out from behind. Stunned, Charlie was unprepared for M. Bison's instantaneous Psycho Crusher attack, and was capture by M. Bison. Looking at Apocalypse's technology, he began to think of ways to use them and experiment on Charlie in order to make him the perfect Shadowloo soldier. Bison named his new creation Shadow.

Since neither Magento, nor Cammy were present throughout the events in Marvel Super Heroes vs. Street Fighter, M. Bison formed loose partnerships with Omega Red in an effort to reach Apocalypse. He had Shadow ambush Omega Red at the last minute when Apocalypse was defeated, but lost to an over-powered Cyber Akuma. He returns to fight alongside the other warriors in Marvel vs. Capcom 2 because he knows if he does not stop Abyss, there will be no Shadowloo to return to.