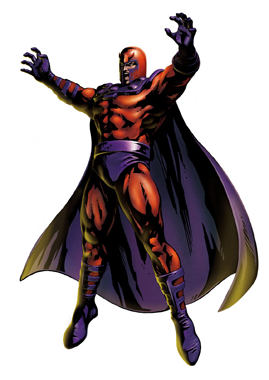 Magneto is depicted as one of the most powerful mutants in the Marvel Universe, possessing the ability to create magnetism and electricity. He is also one of the most morally complex characters in American comic books. A Jewish Holocaust survivor, his actions are driven by the purpose of protecting the mutant race from suffering a similar fate. Characterizations of Magneto have varied through the years, from supervillain to anti-hero to even hero, but he is most often shown as an uncompromising militant and has engaged in acts of terrorism when he felt it was for the benefit of mutantkind. This puts him at odds with his best friend Charles Xavier, whose X-Men seek peaceful coexistence with the rest of humanity. While his militant actions have made him unpopular with some humans, many mutants have come to view him as a savior.

Magneto is a mutant capable of channelling and manipulating magnetic fields, which he uses to control ferrous metals (iron, steel, etc.). His magnetic fields have been measured at over 200 tesla, and no firm upper limit to the intensity of the fields has been established. Magneto can also produce electricity, sometimes in the form of lightning bolts. Magneto can use his magnetic fields to move and otherwise alter objects composed of ferrous metals, sometimes weighing many thousands of tons. He can project ferrous metals at high velocity, liquefy and reshape them, manipulate iron in the human bloodstream, and achieve a wide range of other effects. Magneto has been able to stop armies, to raise islands from the ocean floor, and to move mountains. He once blanketed the Earth with an electromagnetic pulse that caused widespread devastation.

He very often generates a force field of pure magnetic force to protect his person. He can expand this field to protect other people and objects around him. His force field has withstood volcanic eruption, the detonation of nuclear weapons, the vacuum of deep space, and assaults from multiple X-Men and Avengers (including Phoenix and Thor) and even Galactus. Magneto is capable of personal levitation and sustained flight at high speeds. Magneto is able to perceive the world around him as patterns of electromagnetic energy. He can also perceive the electrical auras surrounding living beings. He can use his powers in more than one way simultaneously. Although he often gestures when using his powers, he can utilize them fully even when standing totally still merely by concentrating. Besides possessing superhuman powers, Magneto is a genius with competence in various fields of advanced science. He is an expert on genetic manipulation and engineering.