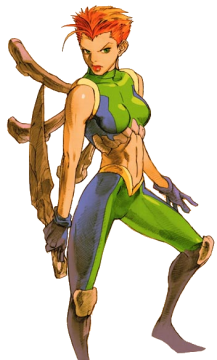 Marrow (Sarah) is a mutant whose bones grow out of her skin and can be removed from her body, providing her with potential knives and clubs as well as body armor. As a child, Marrow was taken in by the Morlocks, a band of grotesque-looking mutants who hid in tunnels beneath New York City. As a young adult, she formed the violent splinter cell Gene Nation until, under the orders of Morlock leader Callisto, she joined the X-Men to redeem herself. She made progress controlling her powers and learning a moral code, but eventually fell in with the paramilitary group Weapon X.

She has shown herself to be a staunch team player (more-so with the X-Men than with either Gene Nation or Weapon X) who is prepared to risk her own life to protect those of her teammates. Despite her apparent disdain for humanity, she has revealed that she would like nothing more than to be able to fit in with them and be happy. While there have been occasions that this has happened for her , they have never lasted long and only served to increase her anger and bitterness towards the world when they have been taken away from her.

Marrow is a mutant with the ability to enhance the growth of her skeletal structure. She utilizes this power in many ways, including the creation of knuckle guards, spears, and projectile spikes. She also possesses a healing factor and enhanced immune system, much in the same vein as Wolverine since every time a bone is ripped out a wound remains which closes itself soon after. She also possessed two hearts to compensate for her random bone growth Her bones seems to be much more durable than normal; she had easily survived heavy hits in multiple areas of her body. Like most mutants in X-Men who possess a healing factor, she is also more agile and stronger than the average woman in her age group and physical condition. Marrow has excellent tracking skills.