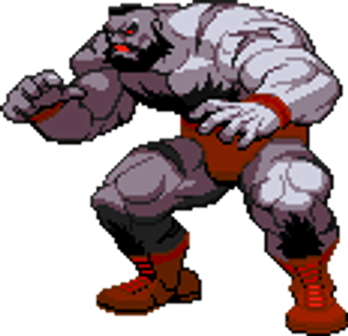 Mech Zangief is a robotic prototype of Zangief developed by M. Bison while in the Marvel Universe using some of the technology that he stole from Apocalypse. It is similar to the technology that M. Bison used to turn Charlie and Chun-Li into Shadow and Shadow Lady, except that Bison didn't actually have Zangief available as a test subject. It was built largely on video and data collected about Zangief throughout the fights.

Zangief first encountered Mech Zangief during MSH vs SF. While chasing Shadow into M. Bison's temporary Marvel Universe headquarters, Zangief and the Hulk became lost looking for a way out. They stumbled upon Mech Zangief, and Zangief became enraged, believe the robot to be an evil Marvel version of himself. The robot was only built with combat programming and little to no other artificial intelligence. It was long before Zangief subdued the robot, surprised to find that the blue version of himself was full of mechanical parts and circuitry.

Accompanied by Sakura, Zangief took the robot to see Dr. Strange on the Hulk's advice. Dr. Strange performed a ritual that enabled Zangief to absorb the essence of the robot into himself, allowing Zangief to transform into a robotic version at will. The spell would last for as long as Zangief remained in the Marvel universe.

Mech Zangief is different from Zangief in the following ways: Mech Zangief has Hyper Armor on constantly, and as such, cannot block any single attack. However, he can't ever be stunned either. There is no such thing as playing defensive with Mech Zangief because it's impossible. The player sacrifices the ability to block for the sake of being uninterruptible and constantly on the offense. Throws are the only exception to this, but a good Zangief player can throw his opponent before they can throw him. Mech Zangief loses the Banishing Flat special move in favor of the Vodka Fire special move, which is nearly identical to Dhalsim's Yoga Flame, only colored blue. He also loses the Ultimate Final Atomic Buster Hyper Combo and gains the Siberian Blizzard Hyper Combo, which is a vertically ascending double lariat move.