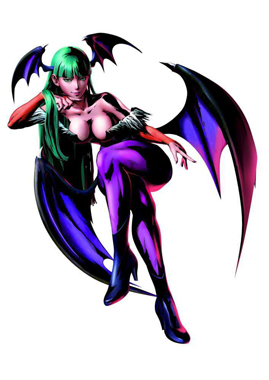 Morrigan is very vain, and lives for little more than the excitement of battle, although her character progression shows that Morrigan slowly takes up more of her responsibility seriously. She is a beautiful succubus woman with long, light green hair, and bat-like wings on her back and the sides of her head. Morrigan can reshape these wings into spikes and blades when attacking her enemies, as well as using them to shield herself from enemy attacks. Her wings can also separate from her, and form into a cloud of bats. She uses a variety of magical attacks as well.

Although Demitri would seem to fill the spot, it is often suggested and implied that Morrigan is the main character of the Darkstalkers series, due to her importance in the overall story as well as her many appearances outside of her game series. She may even be considered the protagonist or something of an anti-hero, since despite her demonic appearance and nature, she is not evil.

This mode for Morrigan is a hidden character within Marvel vs. Capcom. An accidental head collision between Morrigan and Lilith results in them accidentally swapping bodies, and Lilith now being the dominant one in the pair. As a result the names of many attacks are changed, though behavior is apparently unchanged. The biggest change is the loss of the ground attack Silhouette Blade for Splendor Love, a move akin to Lilith's in Vampire Savior. Interestingly she loses her level 3 hyper, but gains no replacement move for it.