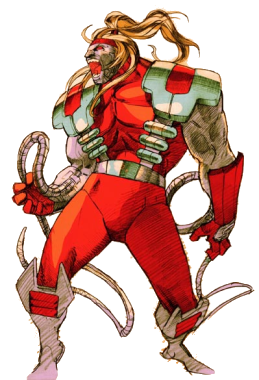 Omega Red (Arkady Rossovich) is a mutant whopossesses the ability to siphon the life-force of others. The Soviet counterpart to the Weapon X program of the United States and Canada turned him into a supersoldier, bonding a super strong metal alloy called "carbonadium" to his body and implanting metal tentacles, which focus his life-draining abilities, into each of his arms. Omega Red possesses a variety of superhuman attributes as a part of both genetic mutation and artificial enhancements granted to him by the Soviet government. Omega Red possesses superhuman strength, endurance, and a high degree of resistance to physical injury and radioactivity. He has a superhuman regenerative healing factor similar to that of Wolverine and Sabretooth.

He also possesses the ability to secrete an odorless pheromone that weakens anybody within his immediate vicinity. The pheromone has never been given an official name, but has often been called his “Death Factor” in opposition to Wolverine and Sabretooth's “Healing factor”. The pheromone is sufficient enough to render his targets unconscious, or even kill them, if exposed to the pheromone for a long enough period. He must secrete this pheromone, or it will start to feed off of his own body.

Omega Red possesses retractable tendrils housed within his arms made of carbonadium, an artificial alloy that is the former Soviet Union's attempt at creating True Adamantium. Carbonadium is more malleable than adamantium and, while being vastly stronger than steel, is not as durable as adamantium. Carbonadium, however, is for all practical purposes virtually indestructible. Omega Red is able to use the tentacles as highly effective offensive weapons, often brandishing them like whips during combat. The natural durability of the tentacles, combined with his physical strength, are sufficient to cause damage to most conventional materials.