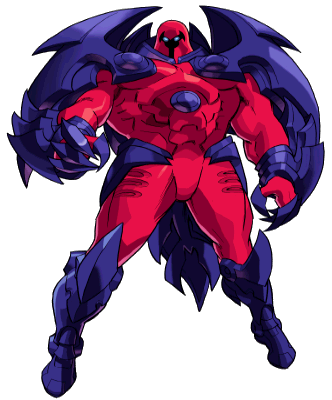 Onslaught is a supervillain who first fully appeared in X-Men (vol. 2) #53 (June 1996). Although his nature was initially unclear, Onslaught was a composite lifeform made up of Professor Xavier's repressed mental characteristics and influenced by psychic contact with Magneto. Using Xavier’s vast psionic powers and Magneto’s control over the electromagnetic spectrum, he transmuted himself into the physical world and was defeated only through the combined efforts of the entire Marvel superhero community.

"Onslaught" is also a shorthand for the Onslaught Saga, which began shortly before Onslaught: X-Men, ended in Onslaught: Marvel Universe, and led directly into the Heroes Reborn collection of series. The actual beginning of the saga is hard to determine, due to a great deal of foreshadowing and preluding. The story itself was divided into two categories; Phase (comics that tied in directly with the battle against Onslaught), and Impact (comics that were affected by Onslaught, but not tying directly into the struggle against him).

Onslaught has appeared as the final boss in Marvel vs. Capcom. In that version of the story, Xavier subconsciously used Onslaught's power to call heroes from another universe to help the Marvel super heroes battle him. At the end of the game, the player faced Onslaught in the two forms seen in the comics. In two endings to the game, Jin Saotome (in his own ending) and Captain America (in Hulk's ending) sacrifice themselves to defeat Onslaught (who had become the mass of pure energy in said endings)