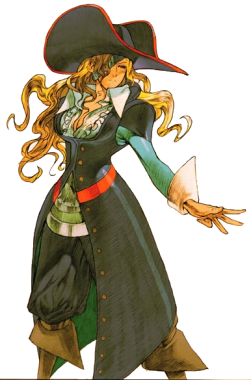 Ruby Heart is the protagonist of the battle against Abyss in Marvel vs. Capcom 2. She is a French-speaking pirate who owns the flying ship that is responsible for carrying the Marvel and Capcom heroes into battle. Ruby Heart is looking for the mysterious orb that the final boss Abyss possesses. Once Ruby Heart finally obtains the orb, she doesn't seem very pleased with it, and throws it into the ocean.

In Ruby Heart's Gamma Assist, she holds out an orb, that when taken, makes all your attacks do more damage for a short period of time. Only you can take the orb, not your opponent. The Fantôme does very little damage; however, once a character is hit, the ghost clings to them and drains away their super meter gauge. After a while, it disappears--this also happens if you're hit or you use the Milles Fantômes super (which, by the way, does physical damage and drains no HC power). Interestingly enough, this move stays on-screen even if you switch out. The LP version of the Rafale Canon results in Ruby attacking if the thrown anchor hits. For the HP version, she simply traps her opponent in the anchor's chain, leaving them momentarily vulnerable.

The Tour de Magie is a Level 1 Hyper Combo, and it's blockable. When used, Ruby Heart drops a barrel on her opponent. You can then use LP or LK to throw knives into eight slots on the barrel (four on top, four on the bottom)--each time a knife hits the barrel, your victim takes damage. However, if you put a knife into the wrong hole, it explodes prematurely and your opponent flies out. Once you get four holes filled, the game ends. If you hit an airborne opponent with this, they fly up into the air, as if you'd hit them with a Variable Attack, intead of getting trapped in the barrel.