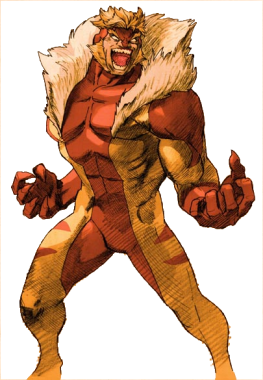 Sabretooth is an arch-enemy of the X-Men’s Wolverine. He is a mutant who possesses superhuman strength, a healing factor, razor-sharp teeth and claws, and enhanced senses. He is a bloodthirsty sociopath who has murdered numerous people both to fulfill his animalistic urges and as a mercenary. Although the specifics of their feud are, like most aspects of Wolverine’s past, hazy, it is known that he and Sabretooth were victims of the Cold War supersoldier program Weapon X and that Sabretooth saw Wolverine as competition and tried to make his life miserable. The two have been bitter adversaries ever since. If Wolverine tries to suppress his inner demons, Sabretooth is the exact opposite: he has totally embraced the beast within.

Suffering from severe bloodlust, Sabretooth hires telepathic mutant Birdy to help him keep his urges in check by providing what he calls "the glow," a psychic blast that satiates his bloodlust and numbs the pain of his suppressed memories as a youth, allowing himself control for short periods. Sabretooth is next hired by the Hand's leader, Matsuo, in an attempt to defeat the X-Men with the newly-reanimated Omega Red. During the battle, Psylocke possesses Sabretooth to free her teammates.

Sabretooth is a mutant with a number of both natural and artificial improvements to his physiology. His primary mutant power is an accelerated healing ability that allows him to regenerate damaged or destroyed areas of his body far beyond the capabilities of an ordinary human. He can regenerate organs such as missing eyes and large portions of flesh. All of Sabretooth's natural mutant attributes stem from, at least partially, his accelerated healing factor. This "healing factor" also grants immunity to most toxins and diseases. The unique regenerative qualities of his healing powers retards Sabretooth's natural aging process. Sabretooth possesses superhumanly acute senses that are comparable to those possessed by certain animals. Sabretooth is able to see objects, with greater clarity, at much greater distances than an ordinary human. His sight is enhanced to the point that he can see with this same level of clarity in almost complete darkness, just like a nocturnal cat. His sense of hearing is enhanced in a similar manner, allowing him to hear sounds that humans cannot. Sabretooth is able to use his highly developed sense of smell to track targets by scent. He is able to track targets with an impressive degree of success, even if the scent has been eroded by certain natural factors, such as weather conditions.