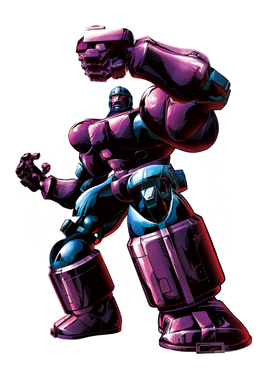 Invented by Dr. Bolivar Trask, the Sentinels are programmed to hunt and capture or kill mutants. Several types of Sentinels have appeared through the years, manufactured by various private and paramilitary groups, but the typical Sentinel is three-stories tall, possesses the ability to fly, project energy blasts and detect mutants. The Sentinels are technologically advanced and are often gigantic in stature. Although many Sentinels are capable of devising tactics in combat, only a handful of unique Sentinels are self-aware. Sentinels are designed to hunt down mutants, especially the X-Men, and so typically function as supervillains or as the tools of other villains. They have evolved and improved in their capabilities with every new iteration.

Sentinels have a wide array of abilities: they can fly, shoot various weapons (primarily energy blasts and restraining devices) from different parts of their bodies, and detect mutants at long range; some of them can even change form and re-assemble after being destroyed. Sentinels' typical attacks involve either direct melee combat or firing concussive energy beams from the palms of their hands. Sentinels also possess vast physical strength and their bodies are highly resistant to damage.

Most dangerous of all, some variant Sentinels have the ability to learn from the attacks they face and create defenses against them, which hampers the opponents' chances of defeating them. Several groups of Sentinels have been created and/or led by a massive Sentinel named Master Mold. Dr. Bolivar Trask equiped Master Mold with powerful weaponry and the ability to speak; Master Mold was also mobile so that it could defend itself from mutant attackers or so that it can be relocated easily if Trask had to find a new headquarters. It appears in the background of the Sentinel processing plant combat area in X-Men: CotA.