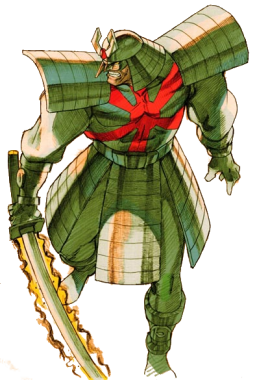 Silver Samurai, the illegitimate son of Shingen Yashida, is a Japanese mutant with the power to charge almost anything, most notably his katana, with mutant energy (described as a tachyon field) which enables it to slice through any known substance excluding adamantium. He also sports a suit of traditional samurai armour. It is made of a silver metal, hence his professional name. Harada was once the bodyguard for the international terrorist known as the Viper and was subsequently an occasional mercenary, but he became the head of Clan Yashida after his half-sister Mariko Yashida's death. He attempted to pay off his clan's debts to the Yakuza and restore its honor.

Though once one of Wolverine's greatest enemies, he had apparently impressed Wolverine so greatly that Wolverine entrusted him with the care of his adopted daughter, Amiko Kobayashi. The Samurai even once helped Wolverine destroy the monster known as "Doombringer", and later helped Logan rescue Amiko and Yukio from their kidnappers. During his time as hero, the Silver Samurai became the leader of the first Japanese superhero team, Big Hero 6.

The Silver Samurai is a mutant with the ability to channel energy into anything, commonly using his power with his sword to create a tachyon field around the blade enabling it to cut through nearly anything. He possesses a teleportation ring, which allows him to teleport from one location to another, granting him great mobility and stealth. As a self-styled samurai, he is a martial arts master specializing in edged weapons, hand to hand combat, and tactics. He usually wears a suit of armor, modeled after traditional samurai armor, but made of modern protective materials. Due to his shady past Keniuchio has extensive knowledge of the operations of criminal organizations, which he now uses in the service of his government to combat such organizations.