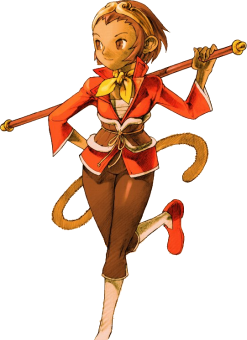 Sonson is a little monkey girl who is the grand daughter of a character named SonSon, who starred in an old Capcom game with the same name. In the game, she tries to find out why her village was struck by an unknown illness. Sonson and her grand father are both based on Sun Wukong, the main character of the Chinese novel Journey to the West. Several of her attacks are derived from the series, such as the size-changing bo staff, Wukong's ability to replicate himself using the hairs of his body, or Sonson trying to cook her opponent in the Shinka Hakke Jin and turn them into sake.

She has a wide variety of unconventional moves. During the Shienbu, the flying monkeys will "fan out" after a while. With the LP version, they fan out sooner (since they're moving slower). Sonson can't do anything during the Wall Climb until she reaches the ceiling. From there, until she reaches the ground again, she can jump off the wall, or do a flying kick. Sonson's α Assist makes her hold out a peach. If you take it, you gain back a small amount of recoverable life. If her POW Hyper Combo is blocked, Sonson remains in the same pose until the 'POW' letters leave the screen. During the En'ou, she has Hyper Armor, although all she can do is move back and forth and use the three attacks relegated to her. The startup animation of this move can hit for minor damage, and she is invicible during the start of this move, too. During a Variable Combination, the α and β versions of Sonson will do the En'ou transformation, but they are not controllable. Instead, they will spit fire in three directions (up, forward, and down) repeatedly.