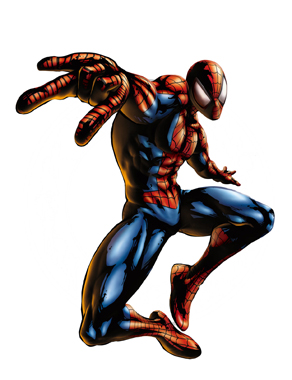 Spider-Man has become one of the world's most popular superheroes and is arguably Marvel's most popular character. When Spider-Man first saw print in the 1960s, teenage characters in superhero comic books were usually sidekicks. The Spider-Man series broke ground by featuring a hero who himself was an adolescent, to whose "self-obsessions with rejection, inadequacy, and loneliness" young readers could relate. Over the years, Peter Parker has developed from shy high school student to troubled college student to a married teacher and a member of the superhero team the New Avengers.

In his first appearance, Peter Parker is introduced as a science whiz kid teenager from the Forest Hills section of New York City who gets bitten by a radioactive spider during a science demonstration. He gains powers and at first attempts to become a TV star. He fails to stop a thief, and weeks later the same criminal kills his Uncle Ben. Learning that with great power comes great responsibility, Spider-Man becomes a vigilante. After his uncle's death, he and his aunt become desperate for money, so he gets a job as a photographer at the Daily Bugle selling photos to J. Jonah Jameson, who vilifies his alter ego in the paper. As he battles his enemies for the first time, Parker finds juggling his personal life and costumed adventures difficult, even attempting to give up. Enemies constantly endanger his loved ones, with the Green Goblin managing to kill his girlfriend Gwen Stacy. Though haunted by her death, he eventually marries Mary Jane Watson, and much later reveals his civilian identity to the world, furthering his already numerous problems.

A bite from an irradiated spider causes a variety of changes in Peter Parker's body, giving him superpowers. Spider-Man has the ability to cling to walls, superhuman strength, a sixth sense ("spider-sense") that alerts him to danger, perfect balance and equilibrium, as well as superhuman speed and agility. Spider-Man's overall metabolic efficiency has been greatly increased, and the composition of his skeleton, inter-connected tissues, and nervous system have all been enhanced. Spider-Man's musculature has been augmented so that he is superhumanly strong and flexible. He has developed a unique fighting style that makes full use of his agility, strength, and equilibrium. Peter Parker is intellectually gifted, excelling in applied science, chemistry and physics. He uses his wits in addition to his powers. Besides outsmarting his foes, he constructs many devices that complement his powers, most notably mechanical web-shooters (ejecting an advanced adhesive compound which dissolves after two hours), which he developed in his teenage years.

This grey version Spider-Man is based on a metallic suit he wore in the comics. His moves are identical to regular Spider-Man's, but he has Super Armor (which only functions while on the ground). However, Spidey's Super Armor only works against certain attacks (e.g. it will stop a Shield Slash, but not a Carbonadium Coil).