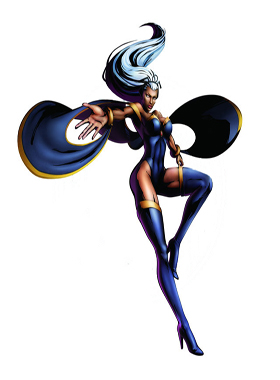 Storm is best known as a prominent leader of the X-Men. She is the reigning queen of the fictional nation of Wakanda, a title held by marriage to fellow Marvel Comics superhero Black Panther. She first appeared in Giant-Size X-Men #1 (May 1975), becoming one of the first black heroines and one of the most popular comic book characters.

Ororo Munroe is the child of Kenyan tribal princess N’Dare and African-American photographer David Munroe. While stationed in Egypt during the Suez Crisis, a fighter jet crashes into her parents’ house, killing them. Buried under tons of rubble, Ororo survives but is orphaned and left with intense claustrophobia. In Cairo, she is picked up by the benign street lord Achmed el-Gibar and becomes a prolific thief. Following an inner urge, she wanders into the Serengeti as a teenager. In the Serengeti, Ororo first displays her mutant ability to control the weather. For a time, she is worshipped as a rain goddess, before being recruited by Professor X into the X-Men. Ororo receives the code name “Storm” and is established as a strong, serene character. She eventually supplants her colleague Cyclops as leader of the X-Men, a role she fills out during most of her time as a superhero.

Storm's character has shown a plethora of abilities most of which center on her mutant power to control the weather. Storm possesses the psionic ability to control all forms of weather. She can reduce or raise the temperature of the environment, control all forms of precipitation, manipulate the wind to elevate herself to fly at high speeds, coalescence toxic atmospheric pollutants into acid rain or toxic fog, generate lightning and other electromagnetic atmospheric phenomenon, can fully control moisture & humidity, and has demonstrated excellent control over atmospheric pressure. Besides the atmosphere, Storm has demonstrated the ability to control natural forces that include cosmic storms, solar wind, ocean currents and electromagnetic radiation.