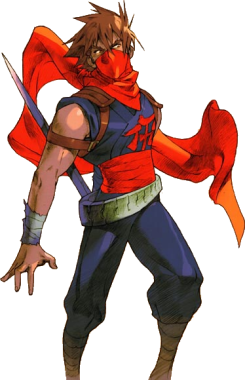 Strider Hiryu (ストライダー飛竜, "Hiryu" usually interpreted to mean "Flying Dragon") is best known as the protagonist of the arcade game Strider and its sequel, Strider 2 (originally titled Strider Hiryu and Strider Hiryu 2 respectively in Japan). The character is jointly owned by Capcom and manga studio Moto Kikaku due to an earlier collaboration. The titular Striders are a fictional group of ninja-like secret agents specializing in kidnapping, assassination, demolition and other specific tasks, with Hiryu himself belonging to the "Super A Grade" class. Hiryu is usually dressed in a purple-colored ninja outfit and often wears a red large scarf that conceals the lower half of his face(In the first Strider he wore lavender violet without his mouth covered). Hiryu's primary weapon is the "Cypher", a plasma-generating broadsword with a tonfa-like handle, although sometimes he is assisted by robotic companions which he obtains as power-ups in the original arcade game.

Most of Striders attacks are converted directly from his abilities in the Strider series. When using the Vajra, light kick makes Strider appear on the left side of the screen, while hard kick makes him appear on the right side. Unlike most moves, this doesn't change, even if you're on the other side of the screen. The button used for the Warp determines where Hiryu will show up. For any Punch version, you can make attacks while you fall (normal moves, special moves, etc.) You can actually combo into this with either Formation A attack (jaguar or eagle), by doing that, then Warping over to your enemy using any punch and hitting them with a falling light kick and going from there. The Sliding Kick is cancelable. It hits low and must be crouch blocked.

During the Ouroboros, satellites rotate around Hiryu and injure anybody who touches them. If you make an attack, the satellites will also fire ring lasers. You cannot throw during this Hyper Combo, because there's no way to get close enough to your opponent without hitting them. This move has invulernability in the first Marvel vs. Capcom, but not the second.