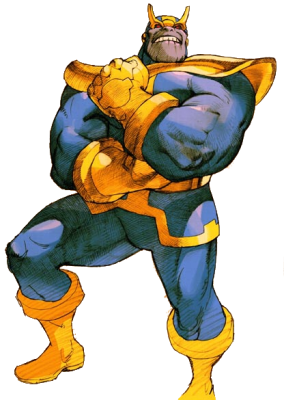 Thanos is born on Titan, a moon of the planet Saturn to Mentor and Sui-San. Due to a genetic quirk Thanos is born with the Deviant gene and as such resembles the Deviants - the Eternals' cousin race - more than his own people. Although treated fairly by his race, Thanos is mindful of his appearance and becomes distant, only keeping company with his brother Eros. Thanos matures to adulthood, and via the use of bionics and mysticism augments his abilities to easily become the most powerful of the Titanian-born Eternals.

Bitter at being an outsider, Thanos is driven insane and becomes fascinated with nihilism, embarking on his quest to "please" death, and begins by conducting a nuclear bombardment of Titan that kills millions of his race. Many years later, Thanos begins his plan to conquer the galaxy by building a base on Earth and constructing a space vessel in the solar system. It is at this time that Mistress Death - drawn by the level of Thanos' obsession and his now considerable power - manifests itself before Thanos, being an abstract entity and the personification of the universal concept of death. Thanos becomes determined to prove his "love" to Death for this sign of affection by destroying all life in the universe.

After obtaining the Soul Gem from Adam Warlock, Thanos develops a weapon with the other Infinity Gems powerful enough to destroy stars. Thanos is once again defeated and turned into stone. Years later, the Silver Surfer witnesses the resurrection of Thanos by Mistress Death, who feels that Death needs a champion once again. A revived Thanos decides to collect the Infinity Gems, which he takes from the In-Betweener and the Elders of the Universe. Thanos then combines the gems on his left glove to create the Infinity Gauntlet, which allows him to exceed the power he once possessed with the Cosmic Cube. Thanos honors Death by erasing half the population of the universe, and then goes on to defeat the entire cosmic hierarchy (e.g., Galactus, the Celestials, Eternity) as Death watches. A group of Earth's superheroes almost defeat an overconfident Thanos, who then loses the Gauntlet to the space pirate Nebula, who claims to be his granddaughter. Nebula then undoes all of Thanos' changes, only to then lose the Gauntlet shortly after to Adam Warlock.