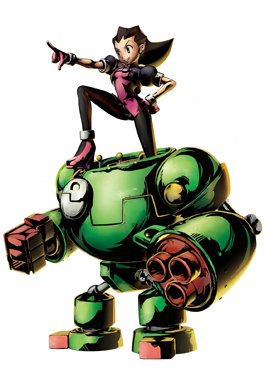 Tron Bonne (meant to be pronounced like the instrument, trombone) is a character from the Mega Man Legends series. She serves mainly as an antagonist but is also an anti-hero of sorts in the series. She has forty-one Servbots at her command. Similar to Roll Caskett, Tron is the mechanical genius of the Bonne family. She is in charge of building all of the Bonnes' mechanical devices, including the Gustaff, Gesellschaft, and even her adorable Servbots. She has always wanted to go on missions and adventures just like her older brother Teisel, but was never given the chance until Teisel and Bon were kidnapped by Loath and Glyde. After rescuing Teisel and Bon from Loath's clutches, Tron has always been Teisel’s "right hand girl" in all of the Bonnes' adventures. Tron is also the creator and mother of the Servbots, who she treats just like children (which is how they basically behave). Although Tron will not admit it, she also has a huge crush on her arch-rival, Mega Man Trigger.

She is mostly an antagonist but sometimes an erstwhile love interest of Mega Man Trigger. Since she has shown some proper morals throughout the series (such as helping Mega Man out in Main Gate in MML) this would make her an "anti heroine" of sorts. She's a genius at mechanics and builds all the machines that the Bonne family uses in their schemes. She's very feisty and hot-headed, as well as extremely crafty. Many people who have only played Mega Man Legends may get the impression that Tron is nothing more than a bossy slave master to her Servbots. However, it is quite clear in The Misadventures of Tron Bonne that she is very much a maternal figure to them. Although at times she rules the Servbots with an iron fist, she is also just as quick to warmly praise and reward them when they do a good job and is very comforting to them when necessary.

When the Shiki Dan is used, Tron aims a raygun at her opponent. The laser sight (red orbs), aren't the part that hits—this only occurs when you see the gun fire in Tron's hands (so in effect, the projectile is invisible). If this move does hit, two Kobuns will latch onto Tron's enemy, stunning them momentarily. Afterward, they'll run away with two red crystals above their head, that you will automatically collect even if you're in the air. However, the crystals don't give you back any lost life, unlike the crystals Kobun can get during his Engo Kougeki (Tsukami!) move.