This page describes the city control screen. You can enter this screen by right clicking a city or by clicking the City button at the top of the main screen. The city screen provides information on the city (population, defenses and spells) and allows you to control city production. 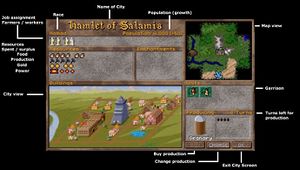 The two main uses of the city screen is to control the job assignments of the population and the production. The exact output of your city will depend on terrain, race and the buildings of the city.

You can assign jobs to your population by clicking on the population at the top left of the screen. The leftmost people are farmers and will produce food as well as some production. The people on the right re workers, which will produce no food, but a greater amount of production. As your cities grow, some of the population will become rebels. These people will provide no resources, but still require food. Rebels can be changed to productive workers by building religious buildings or providing a larger garrison.

Below the population is the resource screen. This shows the complete resource output of the city. A city must produce enough food for its citizens; one food per population. Surplus food will be used to feed your armies or sold off for gold. Food is represented by bread. Production goes into building structures or units in the city. Production is represented by pickaxes. Gold is represented by coins and can be affected by the tax rate, controlled through the tax collector option under the Info button on the main screen. Most buildings require a gold upkeep. If your city doesn't produce enough gold to pay for its own buildings, the shortfall will be represented by grayed-out coins.

The city view is mostly aesthetic. It shows your city growing, along with all the buildings your workers have constructed. Clicking on a building will give you the option of selling it for gold.

The map view allows you to see the location of your city on the main map. A city can only utilize the resources that fall under its territory, as seen on the map view.

The garrison view shows the troops defending the city. Garrisons also provide happiness for your citizens (it's a dangerous world, after all). As with all map squares, at most 9 units can occupy the city at any time.

The production view shows the unit or building currently under construction. It shows the number of turns remaining for the item to finish and gives you the option changing the production or buying the remainder, finishing the project immediately. Clicking the Change button takes you to the Build screen.

The build screen show you what projects are available for production in this city. The left shows buildings and the right shows units. Note that many units and buildings require other buildings as a prerequisite. 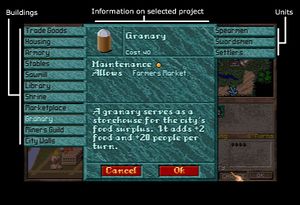 By clicking a project, you are provided with information on the project (stats on a unit, effects of a building) and the build cost. No change is made unless you click the OK button.