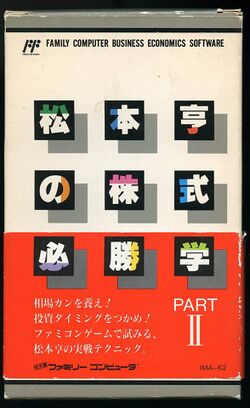 The game is a stock trading simulator akin to something like Wall Street Kid. The player needs to keep track of which stocks are rising and falling, identify trends and invest wisely to ensure a wealthy and happy life. In the previous game, the main character became a disciple of economic commentator Toru Matsumoto, and fulfilled the goal of turning 1 million yen into 100 million in one year's time. In this game, the goal is now to turn 4 million yen into 7 billion yen in two years.

In the previous game, the main character could find a girlfriend and marry her. Now you have a wife and a 6 year old child at the start of this game, whose names and birthdays can be entered at the start of the game. In this game, extra-marital affairs are made possible, along with the abuse of medical stimulants.

The game has a battery backup to save your progress, and progress is saved at the end of every in-game day. If you attempt to reset the game without going through the required quitting process (in an effort to avoid any losses that day), the game will detect this and halve your funds as a penalty.