Me & My Katamari | Table of Contents | Gameplay | Walkthrough

Me & My Katamari/Table of Contents 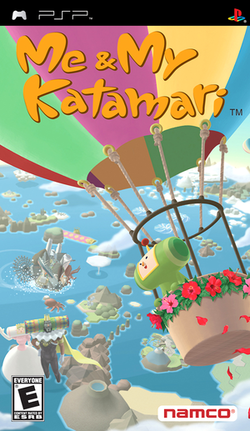 Me & My Katamari (僕の私の塊魂, Boku no Watashi no Katamari Damashii?, lit. "Our Clump Spirit") is a video game on the PSP platform. It is the third game in the Katamari Damacy series, the first game on a portable system and the first game produced without the involvement of series creator Keita Takahashi.

The King of All Cosmos and the Royal Family decide to take some time off from their celestial construction and travel to Earth for a well-earned (for the Prince at least) tropical summer vacation on their own sunny island. Unfortunately, the King's over-exuberance creates a tsunami that strikes and devastates nearby Paradise Commonwealth Island. One of the residents, a turtle, washes ashore next to the Royal Family and tells them his tale. The King then decides to make new islands for the animals of the Commonwealth with several katamari. Similar to the previous Katamari titles, the King sends the Prince to the Sunflower Continent, which is full of the paraphernalia used to create new landmasses.

Me & My Katamari/Table of Contents