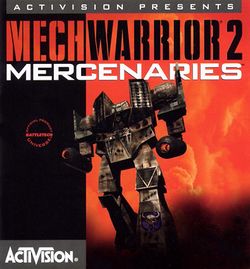 It reintroduces some of the financial elements of the original MechWarrior; while there is still a pure combat story mode available that plays more like the past two titles, the focus is on running a mercenary unit. Story missions are arranged in a largely non-linear path (most are purely optional), and there are also short randomly generated contracts. Players are able to salvage spare parts from enemy mechs (sometimes even the whole chassis), and are free to buy, sell, and customize mechs and mech parts, putting a greater emphasis on disabling enemy mechs rather than obliterating them. Unlike in the past two games (where the Clans paid for everything), all expenses (including travel, ammunition, wages, and repairs) must be paid by the player unless the contract specifies that the employer will pay for some expenses.

Unlike the first two games, Mercenaries takes place inside the Inner Sphere and before the Clan Invasion; because of this there are many Inner Sphere mechs available that did not appear in the past two games. The story opens with the player's commander falling in battle and, in her will, choosing the player as her heir and the new manager of the company. After various missions the game ends with the climatic Battle of Tukayyid.