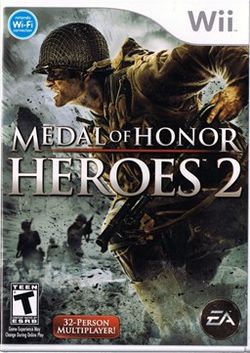 Medal of Honor: Heroes 2 is a sequel to the successful PSP game. This is a unique WW2 game which deals with the Hitler trying to create a nuclear bomb that could take out the town and it's John Berg's job to go through this adventure to get to the core of the problem and take out as many Germans as he can. This is the last for both PSP and Nintendo Wii of the Medal of Honor series.

For casual fans, there's a Time Crisis spin-off Arcade Mode in which all you have to do is shoot while the camera moves automatically through the game but is not available for the PSP. For hardcore fans who likes WW2 games, there's a Campaign Mode in which you have to contend. Not just killing soldiers but also tuning the radio and avoiding the mines in this epic game. This game is compatible with the Wii Zapper.

The first for the world except for Australia is online play. Up to 32 people can duke it out with deathmatch and team deathmatch on the single player maps redone for the purpose of this multiplayer mode.