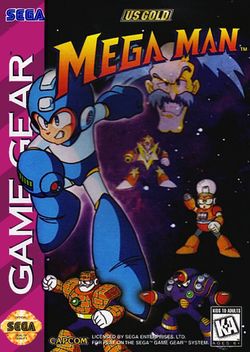 Mega Man is an action platform game for the Sega Game Gear. It was developed by Freestyle, licensed by Capcom, and published by U.S. Gold only in North America in 1995. Despite sharing a title with the NES original, it is not a remake of that game.

Mega Man for Game Gear is based on elements from the NES versions of Mega Man 4 and Mega Man 5. Differences include a lack of continues (if the game is over, it restarts to the title), the addition of vertical scrolling (due to the Game Gear's screen size), power-ups bouncing when they hit the ground, and a hard difficulty mode (Passwords are difficulty specific. A password received in one mode of difficulty will not work for the other).