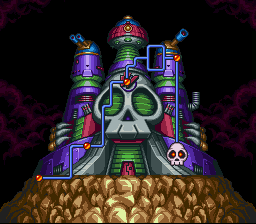 First, collect a few items at the beginning of the stage, most notably the second free W-tank.

All the eight Robot Masters are in the locations as below. Make sure you DO NOT use any E-tank nor the S-tank: you will need all five of them against Dr. Wily's Capsule.

Fight the hardest robots first, so that the later ones allow to restore energy.

After defeating them, a teleporter will appear allowing you to travel to Dr. Wily himself. 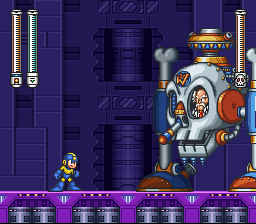 I recommend focusing on dodging and destroying his little creatures. Throw in a few good hits when you can, but think defensively. The charged Mega Buster shots will do just as much as a Thunder Bolt, so use them to take him down quicker.

Again, DO NOT use any E-tank nor the S-tank: you will need all five of them against Dr. Wily's Capsule. 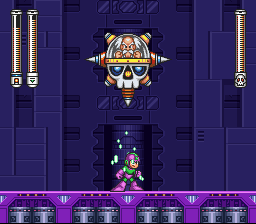 Blast him when he appears, since he becomes invisible between attacks. Have fun, he takes 28 normal hits (or 10 charged Wild Coil hits), so this might take a few tries. To eliminate the four balls from being summoned, use Thunder Bolts (strike him), this should increase your health capacity by a lot.

Most likely you will die the first few times when facing this boss. If you have the max amount of spare tanks (four each of E- and W-Tanks to refill your life and weapon energy, and one S-Tank to fill your life and all your weapons at once), you can probably outlast him even if you get hit often.