The Central Computer is an indoor area where you will encounter Magna Centipede. As if that is not enough, you will also have to face off against some ingenious traps, with moving blocks as well as shielded robots, on top of alarm systems which can generate even more machines aiming to kill you.

Magna is short for magnet. 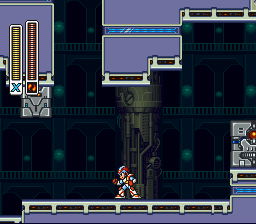 The Heart is up into that hole.

These first enemies create shields in front of them. Use a fully charged shot to deal with the shield, then destroy the robot with pellets. Otherwise, a single shot of uncharged Bubble Splash will dispatch them.

The next room will have spotlights moving back and forth. If one catches you, the blocks will fall from the ceiling and start to shoot at you and it is hard to dodge. Avoid getting caught because you are going to need the blocks to stay up there to get the heart tank. You can use the sections of the stages with background walls to hide, like Metal Gear.

After the bit with the spotlights, you will see a weird block that looks like it has an eye. It will slide away, but do not chase it. Instead, jump onto the platform it was on and dash jump to the left and try and catch the bit hanging off the ceiling with a walljump. Slide off and dash in mid-air to the left to catch the block, then jump up the wall hole in the ceiling. You will find a Heart tank waiting for you. If you got caught earlier by a spotlight, the block will not be there and you will need to try again another time. If the jump is too hard, you can use a fully charged Speed Burner and an air-dash to just get right to the block. 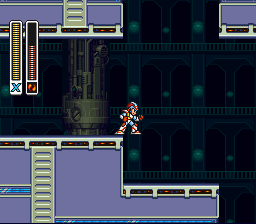 These big blocks, once you get close enough, will slide away and form structures. You can wait for them to stop coming or just dash away. The pink ones can be destroyed and often hold energy capsules. They will try to crush you so stay on your toes for this section.

After the block bit, you will jump over a hole in the floor and then you will see a small passageway. Stop! There is a Sub-Tank above you. To reach that hole in the ceiling, you will need both the Legs and Arms upgrades, plus the Speed Burner. Go back left to the highest point you can get, right before where there is a large gap in the ceiling. Jump right, airdash, then release a fully charged Speed Burner in mid-air. You should hit the wall and be able to climb up and claim your prize. Move on from here. 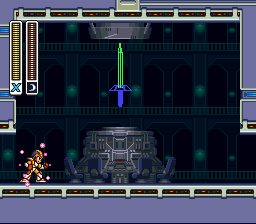 In this room, you will be attacked by a wireframe sword miniboss. You need to hit the hilt to do any damage to it. It will swing back and forth before shooting at you, so watch out. The Bubble Splash will make quick work of it if you can get close enough, and the Speed Burner is not too shabby either. Otherwise, two fully-charged and well-aimed Sonic Slicers will do the job. 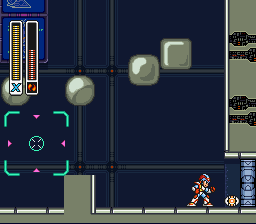 Entrance to the X-Hunter room.

After defeating the sword, you will take a drop with spotlights trying to look for you. If there is an X-Hunter in this stage you want to fight, avoid the spotlights at any cost, as they will trigger falling blocks that bar the optional boss door. For more information on the X-Hunter system click here. In the first drop, hug the right wall. The second drop is trickier: try hugging the right wall, shooting the turret, then dashing in mid-air between the two spotlights to the left wall and hugging that one down.

In the large room at the bottom, a pointer will look around trying to find you as blocks fall from the ceiling. Dash to the very end of the room and do not wait for the falling blocks! If the pointer finds you, it will make the following miniboss more powerful (trust me, you do not want to be caught more than once). If you outran all the following blocks, you will find the optional boss door at the far right end of this room. Otherwise, climb up the wall. 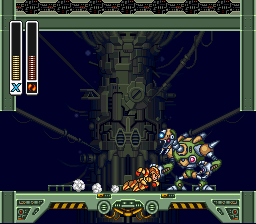 Another miniboss, this time a one-eyed robot. If you got caught before, it will change colors and have more attacks. Its weak point is its head. It can shoot floor-hugging shots: jump over them and hit it in its head. It can also jump and shoot three shots downwards: dash under it to avoid these. The Speed Burner does a lot of damage and will make quick work of this guy.

The next passage will blink red as the security system turns on... so much for being stealthy! Block turrets will drop from the ceiling, bridges will fall from under you, and the sliding blocks will push you away. Do your best, as at the end of this hallway lies Magnet Centipede. 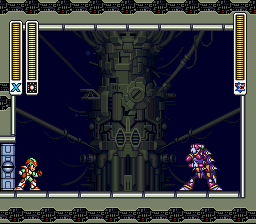 Magnet Centipede is sort of a ninja and you need to stay on your toes. It can disappear and reappear anywhere, including on the ceiling and right in front of you. Often it will fake you out, appearing somewhere then immediately teleporting away. Wait for it to stay in one place before blowing your charge shot.

It will dispel its tail and have it circle you; wait for the pieces to stop moving then quickly dash away. It can activate its magnet and pull you towards its tail. If It grabs you, quickly button mash out of there before it can damage you.

If you have the Silk Shot from Morph Moth, it is a lot easier. Once you hit it with it, its tail will fall off, limiting its arsenal significantly. Now, it can only teleport and throw ninja stars and jump. When the silk shot hits the ground, it splits into four pieces that fly away diagonally. So if it teleports to the ceiling, you can stand in the center and throw the silk shot into the corner away from it and have the piece fly into it from the corner. Otherwise, you can just jump up the walls and hit it, whatever is easier.

Defeating Magnet Centipede will net you the Magnet Mine, which shoots a remote-controlled projectile. Tap up and down to control its trajectory. The mine will explode upon contact with any enemy, but it will stick to any wall and explode after a few seconds. The charged-up shot moves more slowly and can get through walls.

Bosses weak against this weapon
The Magnet Mine is very effective against Crystal Snail and the X-Hunter Agile.