Right away you will find a small wall that will turn into a ramp if shot with the X-Buster. If you shoot the wall, the mono-cycle robot cannot proceed. Bust it and the scorpion bot that follows. 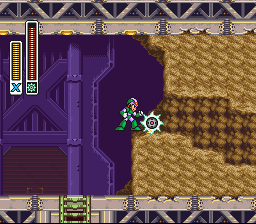 To the right of the ladder down you will see a rock wall that only W. Gator's Spin Wheel can dig through. Go through here to find the X-Hunter room.

(Remember, to access an X-Hunter, you must have defeated two Mavericks already, the X-Hunter must choose this stage, and you cannot have previously defeated the Maverick here. Also, if an X-Hunter is here, you must challenge and beat the X-Hunter in this stage or he will not return, denying you access to a Zero Part.) 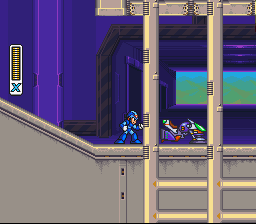 After leaving the roo, make your way back to the left and go down the ladders. Bust some mono-cycles and make your way to a hover-bike like the one you rode at the beginning of the game.

As you ride up, you can drive over spikes and shoot to blast more mono-cycles. When you get to the top you will need to blast down another ramp. 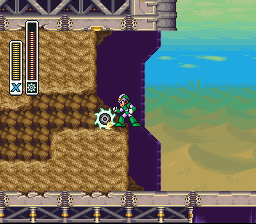 A dead-end is beyond this wall.
Try a charged-up Silk Shot.

You can also go left to a strange room, but you will need a charged-up Silk Shot to find the hidden energy units up here. 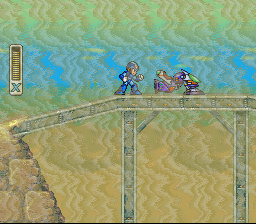 Another hover bike, if you lose the first one. 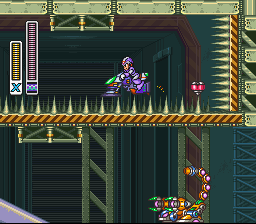 As you continue on, watch the road for motorcycles, just like real life. Unlike real life, blast them, hit a ramp, jump the sandstorm generator or crash into it with the hover bike to destroy it. If you choose the latter, backtrack a little bit and get a new hover bike.

Past the sandstorm generator, just keep spamming the shot to keep lowering the ramps. This part gets tricky. You have to shoot each ramp you come to in order to knock it down and also press the Dash button to boost the bike for maximum jump. If you can manage it, you will get the bike across the chasm, shoot another wall jump (without boosting), go into a series of mini jumps inside the base, and finally to a death spike trap. Make sure to turn the bike around before you ram into spikes. 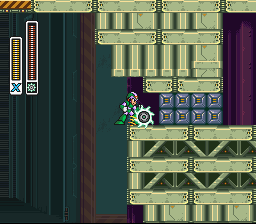 Now continue right and find yet more suspicious blocks that you can saw through with the Spin Wheel. Here you will find some sweet new red and white Legs upgrade. Thanks, Dr. Light, even dead you still manage to make some pretty slick duds! Now you can dash easily in the air. 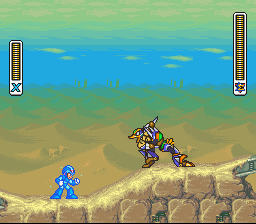 Continue on right, blow up that rocket and keep those pesky reploids from starting their space program.

Now it's time to make short work of this bird with your new found air dash. He's pretty easy, if you use the x buster's upgraded double shot. When he get's close, just dash away so he jumps in from the background. You can also dash to the high point on the hill and jump then air dash over him. Occasionally he will jump up and rain down easily avoidable sonic shots from above.

The Sonic Slicer bounces off walls at an angle. Charged up, it will wipe the screen from top to bottom.

Bosses weak against this weapon
The Sonic Slicer is very effective against Wire Sponge, the X-Hunter Sagesse (Serges) and the first form of Sigma.