A beautiful locale within the depths of the Mega Man world, the Energen Crystal Caves tend to be a bat infested place with wondrous gems which twinkle merrily as you dash toward victory. Beware the falling slabs of crystal, and look out for Crystal Snail's time manipulation.

The Head Upgrade is the reason for this stage to be the first one, because that item helps to find the other ones. Expert players can leave this stage last and start from Overdrive Ostrich's Desert Base. 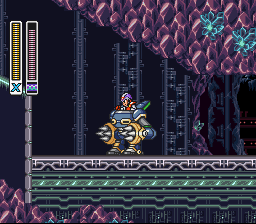 Shortly after the beginning of this stage, the ride armor is in plain view. 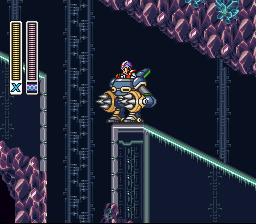 Jump down here for the heart

You need the Legs upgrade in order to get the Heart. The Strike Chain can be helpful, too.

Riding the armor, backtrack and jump down the first pit, stick to the left wall and land on the platform. From ther, dash-jump with the armor and hover as far as you can. When the armor starts falling, jump off it (press up) and perform a mid-air dash. You should land just under the edge of a platform where you can claim the Heart tank.

Use the flying platform to go back, then claim another Ride Armor. 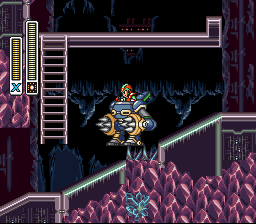 Get on that platform.

When you see a stepladder, go up. Actually, you will need the Ride Armor, so just walk up the corridor a bit more, then jump left on the platform. Use the armor to break the crystals and make a passage, then you have to abandon it and jump on the flying platform to reach the X-Hunter room at the top. 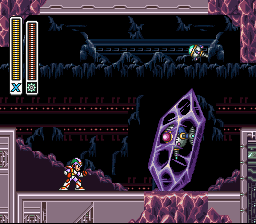 This sub-boss is weak against the Spin Wheel. Either charged or uncharged, it will require four shots. 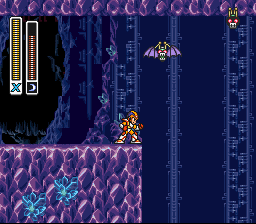 When you get to the section where there is a green crystal block above you (one bound to move) and a silver ramp leading diagonally down to the right, simply run and dash down it. When you get to the bottom wall, jump upwards before you get crushed by the block!

Run forward, slide down the left wall and head through the small tunnel past three wall clinging enemies to reach the head armor upgrade. Get it, get the extra life if you like, run back to the big gap, dash jump to the other side and climb to safety. Follow the ramp to the upper right (ignore the ladder unless you hava Arms upgrade and Silk Shot), destroy the bats, then approach the green crystal block. It will unhinge as usual, so run back to safety. You can either climb the ladder slightly, or just stand to the left of the small indentation below the ladder (it fits nicely right there).

After it slides down, go to where it was before, climb through a small corridor and reach Crystal Snail. 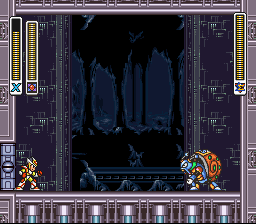 Crystal Snail is pretty easy with the buster, and even easier with the Magnet Mine. Use it once to knock its shell off, and then keep firing it at the Maverick when it jumps. Dash against the shell to kick it away, and shoot again at the Snail. If you do not hit it quickly, it will put its shell back on, so be aware.

Otherwise, it has two attacks: it will shoot three crystal blobs at you which freeze you, or get into its shell and dash to another place in the room. To escape being frozen, you can rapidly tap jump, dash, or shoot. To avoid the crystal blobs, just scale on the wall into one corner of the room. If it rolls into its shell, scale up the wall and be prepared to dash over or slide under it if it dashes at you. Once it gets to low health, it may jump into its shell and in the air, and spin very fast. This attack slows down time, so make sure you can dodge its attacks.

After destroying Crystal Snail, you will obtain the Crystal Hunter, that shoots a projctile in a long arc forward. When it hits any enemy, it will encase it in a crystal that can be used as a platform. The charged-up version slows down all enemies, without damaging any (no Quick Man in this game).

Bosses weak against this weapon
The Crystal Hunetr is very effective against Overdrive Ostrich. It is also required to obtain the Heart in the Robot Junkyard.