The home of Flame Stag, this hot location within the world of Mega Man X2 is one which will test your abilities at rapid wall climbing, as well as force you to think carefully about how to use your enemies to your advantage. It is a fine stage to start in if you know the game well, but a newer player may discover some difficulties, especially during the periods when you need to outrace an erupting volcano.

If you are following the suggested order... (spoiler)
If you are following either the Normal or Speed walkthrough, this is the stage where you should fight the X-Hunter Sagesse (Serges). Why this specific Robot Master? Because Violen is weak against the same weapon for this stage maverick, and you want to save it for the latter; whereas Agile should be fought as late as possible, with the normal X-Buster. Sagesse/Serges is weak against O. Ostrich's Sonic Slicer, but the normal X-Buster can be easier to use. This is because the X-Hunter's barrier rises when you press the Shoot button to charge up, but not when you release it to actually shoot. Fighting with the Sonic Slicer, you should shoot it at the wall, so that it hits the target after the barrier went up and down. The Legs Upgrade mid-air dash is an asset in this battle.

The Volcanic Zone is home to Flame Stag and is quite an intense level, but it is home to a Heart Tank and a Sub Tank. 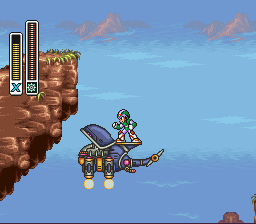 Ride the beetle, then jump to the left

As you head right you will find a large cliff wall. A flying stag beetle will try and crush you against it, so keep wall jumping to avoid it. After it smashes against the wall, try and jump on top of the little platform on its back. If you do so, it will fly upwards. When it stops moving, you will see a little cliff off to the left: jump onto it to find a Sub Tank. Then, jump onto the top of the large wall to the right to find a hole you can drop into. 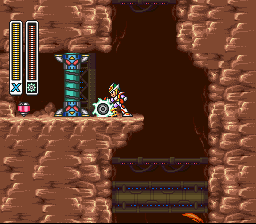 Be closer that that, if you use the Spin Wheel

Head right inside the volcano and you will hear a rumbling. Immediately start jumping up the walls of this shaft, as lava will start rising from the floor! You can grab the powerups if you dare, but if you want the Heart Tank you should avoid them. This is because it is hidden behind a wall enemy that takes quite a few shots to kill, so you want as much time as possible. Use a special weapon to destroy it in a single shot: Spin Wheel, Silk Shot, or Magnet Mine. Quickly grab it and run out to the top of the mountain. You are not safe yet: when the lava reaches the top it will erupt in a big pillar, so watch out.

Go left for an energy capsule, then continue right. 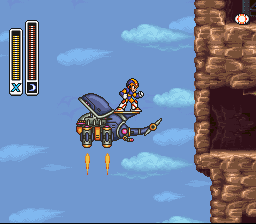 Take advantage of the beetle.

These narrow pillars will start to crumble and fall when you stand on them, so be quick. You will find another big wall and another beetle robot. You will notice some thinner layers of the wall: you can bait the beetle to destroy these walls if you are clever enough. If there is an X-hunter in this stage you want to fight, have him destroy the upper thin wall to discover the optional boss door. For more info on the X-hunter system click here. If you are doing a normal run through, find another way in and continue right.

More crumbling pillars, this time with lava below you, so be as fast as possible. Next you will find a shaft with gas leaks. The gas it expels will not hurt you, but there are these flaming squirrel guys that will ignite it and make it do a ton of damage, so be wary as you head up. Pro tip: a fully charged Bubble Splash will help with dealing with these guys. At the top of the shaft you will find the door leading to Flame Stag. 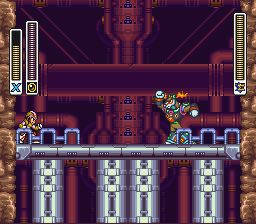 This opponent will be a fierce one, so prepare yourself. The main style of attack that Flame Stag uses is to leap quickly up and down his walls, first leaping to one wall and then to the opposite. Thus if you can adjust to how he attacks you can readily anticipate his route of approach.

He will also run along the ground toward you, leaving flames in his wake. This attack can prove devastating, so be wary and try to avoid it by leaping over him. Stag also tends to throw fireballs, the first one high and the second one low. Simply find the right spot and you can easily evade those two, though the wrong spot will result in pain.

If you climb up the walls to try and escape him, staying to one wall, he will chase you right up the wall. This can catch you by surprise quite easily, so be wary.

At about halfway through his health those flames he uses will change color, becoming blue.

If you want an easy victory hitting him with Bubble Crab's weapon will make it so.

Killing the Stag will net you the Speed Burner, that fires a large projectile and leaves a fire trail on the ground. The charged-up version has a special feature: it is a mid-air dash that inflicts damage to enemies. Combined with the Legs Upgrade, it allows a double mid-air dash, necessary to get two items.

Bosses weak against this weapon
The Speed Burner is very effective against Mortph Moth. It is also necessary to get two items: the Heart in the Dinosaur Tank and the Sub-Tank in the Central Computer.