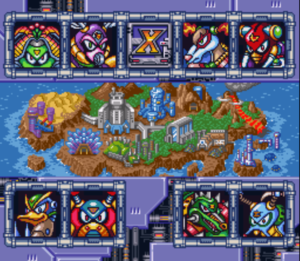 In Mega Man X2 you can select any Maverick's stage to play, but two different routes are suggested below for quick reference. Stages consist of a mostly linear level that contains a mini-boss door containing an X Hunter optional boss and a boss door at the end where you face the main Maverick of the stage.

After you beat any two Mavericks, the three X-Hunters will occupy random stages. You can see which stages they're in on the stage select as the ones they occupy will have a Sigma symbol on the map. In an occupied stage, you can find them in a hidden boss door (these doors will be noted in the walkthrough).

Defeating them will net you one of three Zero parts which, when all are collected, will change the ending fight. Try and find them as late as possible, as the longer you wait the stronger you'll be. But be careful, because if they run out of stages to occupy you'll lose your chance to fight them. For tips on fighting Violen, Agile, and Serges, check out the Bosses page.

The X-Hunters secret
During the final stage, Sigma will summon Zero to fight you. However, if you defeated all three X-hunters in the Maverick stages, the Zero will be a fake. The real Zero will bust in and destroy him, meaning you don't have to fight him. This makes the final battle a lot easier.

The eight main Mavericks can be defeated in order. The traditional, Normal order used in almost every Mega Man game is to choose the next stage so that its boss is weak against the Special Weapon obtained from the previous boss. Because of the requirements to collect all the items in Mega Man X2, this method requires to re-enter many of the eight stages (except for the last one).

An alternative, faster but harder order is possible. With this route, all stages only have to be visited just once to collect all items (with just one mandatory exception). The drawback is that some boss battles will be more difficult, because the appropriate Special Weapon won't be available yet. In addition, some tricks are available to make things easier and allow for less revisits.