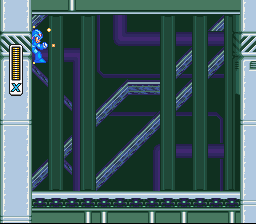 Immediately, when the stage starts, climb up the left wall of the starting room. There is a hidden wall in the top left that contains a heart tank. After this, continue right. 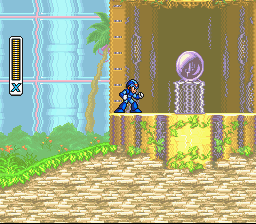 You'll find orbs on pedestals as you continue on. Each time you find one, it will change the weather to sunny or rainy. In the sun, grass turrets grow out of the ground and the frogs overheat, and the rain will push you back a little when you're jumping. The weather doesn't have a very noticeable effect so don't worry about it too much. You can destroy the orbs but it doesn't do anything. If you hit the orb with a special weapon, you can control the weather manually:

Either way, continue on. 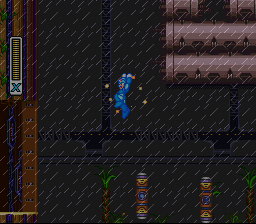 Jump up for the Sub-tank.

After the 2nd orb (it should be raining by this point) you'll find some platforms that float up and down. Jump on top of the first one and wait for it to rise to the highest point. Then, dash jump off to the left and walljump up the tree above the orb. From the tree, dash jump right and walljump up the thing that looks like a bunch of logs. From the top of the log thing, continue right and dash jump to the next log structure. A sub tank will be waiting for you at the end of this one. Jump down and continue on. 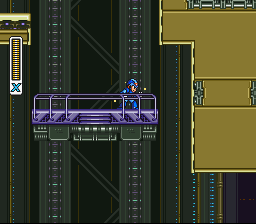 Jump down and find a secret passage.

Next up is an elevator section. Screwdriver enemies will try to jump on you, so dash out of the way before they can. Continue right before the elevator crushes you on the ceiling.

You can sneak below the elevator where you get on, and this passageway leads to an X-Hunter room. There is also an energy capsule for your new Sub-tank.

(Remember: to access an X-Hunter, you must have defeated two Mavericks already, the X-Hunter must choose this stage, and you cannot have previously defeated the Maverick here. Also, if an X-Hunter is here, you must challenge and beat the X-Hunter in this stage or he will not return, denying you access to a Zero Part.) 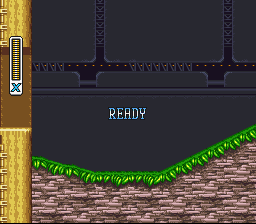 Starting point of the second half.

Next is another orb section, this time with flying enemies that will drop seeds on you. If the seeds hit the ground, they plant themselves into more obstacles, so watch out. Just dashing away and avoiding them entirely is recommended.

Enter the next building which contains some simple enemies. There's a scorpion who takes a lot of hits but you can just stand below him to dodge his lasers - but he'll try and drop bombs if you take too long. After him, there's nothing between you and Mr. Sponge. 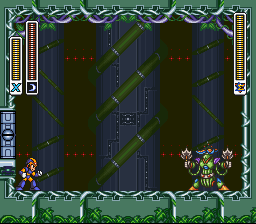 This robot is not too hard. It's weak to the Sonic Slicer (from Overdrive Ostritch) but you can destroy it with the regular gun just fine and you fight it the same either way. The Speed Burner (from Flame Stag) is effective too.

Wire Sponge likes to swing its vine around in a circle in front of it, and when it does this you can't hit it, so charge up your shot while you wait. It'll throw it at you, at which point it's vulnerable. It also will pull itself up using its vine. It'll then shoot seeds at you that'll stick into the ground as spiky vines. You can destroy the vines as it shoots them, and try to walljump and get a few shots on it in the mean time.

When you get it to low health, it can use a desperation move. It'll start to turn red and become invulnerable. Then, it'll shoot a wave of lightning bolts which fall in a pretty predictable pattern.

If you destroy Wire Sponge with the Sonic Slicer, its body will be sliced in two as he explodes.

Wire Sponge will give you the Strike Chain, a short-ranged weapon that can grab items or cling to a wall and pull Mega Man X to it. The charged-up form simply has a longer reach and deals more damage.

Bosses weak against this weapon
The Strike Chain is very effective against Wheel Gator and the second form of Sigma.