The game refers to this boss simply as "Factory Boss" or "Guardian". The word "orotic" comes from Orochi, a monster from Japanese mythology very similar to the Greek Hydra.

Guard Orotic's weak spot is its blue core, but only when the casing protecting it from attack opens up. You can inflict tremendous damage to the Mechaniloid by striking its core with charged strikes from the Z-Saber, but that means you have to approach it directly and jump over the attacking heads. If you want to attack the Orotic from a safer distance, use the Buster's charged shots, but there is always the chance the shots will miss as the Orotic weaves in the air.

The boss attacks with four pairs of heads, in this order:

If you destroy a head, it will be replaced when the empty slot gets at the top; therefore, if you want to, it's better to destroy the heads on the right only, because Orotic rotates clockwise, and it takes longer to replace a head "at 3 o'clock".

If you currently hold an A or S rank, Guard Orotic's EX Skill comes into play, the Core Vulcan. Before Core Vulcan is used, it alerts you to its activation: the eyes on Orotic's heads will "blink". The blue core shoots a series of 8-10 bullets aiming at Zero; by dashing, he can outrun the gunfire.

If you hold already the Shield Boomerang (i.e. if you're not trying to unlock Jackson or Ultimate Mode), it can reflect the EX Skill shots back at Orotic. However, Zero can't dash with the shield out.

NOTE: no information in this section comes from the game, and sometimes this section even contradicts the game. 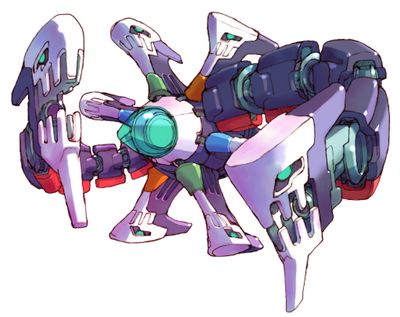 Image description: Guard Orotic's design deviates from the conventional sense of a snake's biology: it is really a huge-sized turbine with not one, but eight serpentine heads, akin to the mythical Hydra and Yamato no Orochi (lit. "Japan's Orochi"). The heads re attached to a gyrating wheel with a high velocity rotor inside that produces enough thrust so allow Orotic may hover in the air.

Guard Orotic is a snake Mechaniloid that was built for search and rescue missions. Its unorthodox design limits its movements to delicate, sideways bobbling on the dense air streams its turbine generates. Consequently, the Mechaniloid's bizarre movements resemble the side-winding motions of a real snake

Originally, the heads were meant to be equipped with lifesaving, interchangeable tools that could swivel into place when a situation called for them: essentially, the ultimate Swiss Army Knife. That is, until someone found the idea of it becoming an oversized tool a waste of its potential and had it converted into a combat machine.

Unfortunately, when Neo Arcadia took on its darker initiative of Reploid elimination, its original purpose was nixed. Soon, the machine fell into the wrong hands and was outfitted with deadly weapons to become a cold-blooded guardian of the Abandoned Factory[1]. Intruders who barge into the factory that outsmart the security systems are doomed to meet the snake if they penetrate through these defenses to the "heart" of the factory, the power station it uses to perpetually recharge itself.

Such great size comes at the tactical disadvantage, however. Guard Orotic's unconventional size and complex machinery requires the use of an energy core that guzzles enormous amounts of power to keep the Orotic beast activated round the clock. It is here that the Mechaniloid can replenish its power cell and be ready at a second's notice to follow out its solitary order to defend its den from any form of threat to its operations. However, Orotic will never be able to venture too far away from its guardpost because of this, so it lies in wait for intruders to enter the generator-filled room it lurks inside, where the lockdown protocols will keep them from running for their lives. But Zero is not a coward. He is a competent warrior in his own right who can wrestle with the Orotic, and perhaps, put the mishandled machine out of its misery.

Don't think that Neo Arcadia will take this loss standing down. You've just snatched a vital resource from their hands, and all the precious goods inside it are now yours for the taking. This leaves them with one alternative: they will ensure that if they can't have it, neither will you...

Capture the Flame Chip, and you will automatically finish the mission. This chip sets enemies ablaze, dealing extra damage; unlike the other two chips, enemies are not stunned. A fully charged weapon can use this attack, but only if you equip the Flame Chip on the Equipment menu. The Flame Chip allows to deal additional damage to Ice-elemental bosses.

Before the next mission[edit]