This mission goes back to the Computer Zone in Antarctica, in a new section that's still operational. Elpizo's been snooping around for a code that will let him into a place in Neo Arcadia, making Ciel think he intends to break into it alone.

Ciel will notify Zero upon transfer that he can't enter the new area through the facility, leaving no choice but to use the roof.

This area is noticeably straightforward and easy to memorize, but enemies stacked all over the place can trip you up if you make a blind run through. Keep your wits about you, and "look before you leap".

Charge the Z-Saber while going straight and hopping up the first incline of the sloped and snowy roof. Many Carryarms with Spikings in tow await to pull cheap shots as they fly in onscreen. Charged attacks or skillful use of Tenshouzan will keep you from stacking up damage.

In between these, not to mention all throughout this one level, await Mini Mines, the obstinate devices that cover nearly every space of the roof. As with any mine, getting too close trips it and sets off a nasty explosion. You can try some risky jumping, or waste them one by one with the second slash of the Z-Saber. With the Erase Form equipped, you'll shave seconds off time wasted getting rid of each one.

Waiting later down the roof are Snow Garms, the canine equivalents of Pantheons, now outfitted as antarctic guard dogs. Just like Garms from the first game, these pounce into the air, tackle you on sight, and bite like there's no tomorrow. As such, press buttons like there's no tomorrow to break free. You can steer clear of the attack by stopping before getting in range of a Snow Garm, and then counter with a charged Z-Saber before they sic themselves on you. Mini Mines along the way also result in dangerous situations to avoid.

The sneak attacks get worse as you continue traveling across the roof. After escaping the Snow Garms, lone Spikings will fly out in the next area, followed by another Carryarm. On the following downward slope are a group of Mini Mines that are neatly packed together, and will go off in a row once one blows. Leap over them all, or deliberately set the first one off with the Z-Saber.

Following two more Snow Garms, you'll discover a sharp drop down onto an iced over pipe, the very same one above the area where Golem Type I guarded the first Computer Zone. A reckless drop can be punished by a Rollin' 22 at the bottom, waiting to put some bullets in you. Slow your fall by wall-sliding to play it safe. The next stretch has more Rollin' 22's trying to take advantage of the slippery pipe, along with the added trouble of Snow Garms. The hindrance of the ice will make running through or away a hassle. Switch to the Buster and either stun or freeze these nasty pairs with Thunder or Ice attacks. Flame attacks won't do you much good here. You can also pull out the Shield Boomerang and knock the bullets back at the Rollin' 22's, and follow up by sawing through the Snow Garms with its charged attack. The one good thing here is a supersized Life Energy Capsule waiting at the end of the pipe to give you a full health refill. 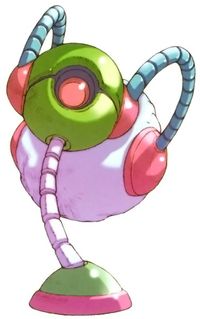 The following stretch of the roof isn't so bad, considering only one kind of Mechaniloid guards it. Yuki da Machines, similar to Deerballs from Mega Man X, toss snowballs at you, but have to take time scooping up snow to roll up new ones to attack. Dodge the first snowball each throws, then retaliate while they're vulnerable. The trickier issue is keeping them from setting off the Mini Mines sprinkled around the roof.

To add another layer of difficulty, Floppers make an unwelcome reappearance. Nothing has changed since the last game; they hover back and forth and detonate violently when anything strikes them. Shoot them as they hover away, and stay well out of the blast range. If they prove to be more of an obstacle at the high wall, use evasive maneuvers them while climbing up and forget about attacking them.

Eventually, you'll find a Yuki da Machine facing the wrong way, throwing its snowballs in the way you're going. Let it throw one before destroying it. The dropoff below is totally coated in Mini Mines, enough to clobber your health for each brazen, sloppy fall you might take. The snowball thrown by the Yuki da Machine will tumble down the slopes, knocking out almost every Mini Mine for you, but it will grow much, much bigger than you think, so don't attempt to race it downhill. Timing means everything as you descend to the ground below. Alternatively, the Chain Rod works.

At the bottom is one Flopper and some E-Crystals. Nothing too perplexing to handle before entering the facility's shutter door, the last section of Computer Zone 2.

This last room has a series of Floppers in your way of Leviathan. If you need a health refill, there's one just above the shutter door. Blast through this flimsy defense at your own pace.

When you reach the data vault, you'll find Fairy Leviathan has anticipated your arrival, and pulls a dirty trick, flooding the room to suit her own attack style with a playful laugh. Eager to "play" with Zero, she tries to make her greeting short but bittersweet. Needing to go after Elpizo, she skips to what she does best; mopping the floor with stubborn enemies. 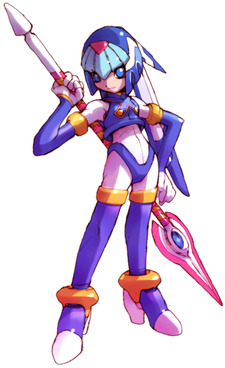 This female Reploid general hasn't mellowed out one bit since your last fight. She isn't hungry for violence like Fefnir because of her nonchalant and teasing nature, not really showing much concern for anything. However, her impish behavior is tinted with a sour note. She has a sadistic streak and teases her opponents with a playful attack style. Having a rematch is enough to send her into a frenzy. Her old attacks remain in place, aided with some newly-mastered skills. There's no spikes anymore, but Leviathan doesn't need them because would be no fun if the victory was cheap. She is perfectly capable of doing their job on her own. Her HP has also been knocked down a bar, but only because this fight is much wilder than the last. Regardless, the one thing that has remained absolute is her weakness to Fire-element attacks.

Leviathan's original attack patterns have been improved, but haven't changed drastically. She also tends to make graceful swims in between attacks, aiding with her helmet jet, having a little too much fun to pay attention to her blind spots. You can really nail her during these moments, before she tries to nail you.

Leviathan's initial attack, provided you don't go after her, is to use her Frost Javelin to send out seeking spearheads after you, and in greater numbers than before. Stun her with a Fire-based attack to make her quit.

Next, Leviathan will try to guard from the front, creating an icicle shield. However, this one will spread out and encircle the room with near absolute range, so try to break the guard with another Fire Chip attack before you have to dodge a crazy assault.

Finally, she heads for the ceiling, creating a wave of thorny snowflakes. The narrow room may have the added benefit of using walls to reach Leviathan if she tries to run away, but the snowflakes are harder to escape in here. Try to wipe most of them out with any weapon that works for you, or attack Leviathan before she makes more than enough. She'll restart the pattern from here

Beware: Leviathan isn't a sitting duck anymore. If you try to attack her in plain sight, she'll attempt a set of counterattacks. These happen in between her three-attack strategy.

Don't try to sneak up underneath Leviathan. She responds with an immediate sharp, downward thrust with her trident, charging up the tip to do even more damage. Back away if you see it coming.

Her other counterattack is a big, circular swing of her trident if you come after her, and the attack has enough punch to knock you clear across the room. Stay out of range so she can't rely on this defense to protect her.

Leviathan's original EX Skill, Freezing Dragon, has been switched out for a much more cold-hearted onslaught. Instead of hunting you down, she draws you in like the warped tease she is. At A-Rank and up, when her HP drops to just about under half, she'll initiate her Overdrive, supercharging her body. She'll be coated in a blue flame the whole time, making her completely invincible while she shows no mercy. Following her activation of Overdrive, she'll use the speed boost to twirl her trident quickly enough to form a huge whirlpool, and try to reel you over to her like a fish. She'll also send out spearheads to hunt you, even more baffling to avoid while you try to fight the pull of the whirlpool. Leviathan cannot maintain the power boost for a very long time at the risk of damaging herself, and she will have to stop at some point. When she does, she'll slam her spear into the ground and set off a shower of ice daggers in different directions. With no way of fighting back, wait out the attack from a safe corner. You'll be able to go after Leviathan again when it wears out, and easily evade the incoming ice shower.

Leviathan's attacks are up close and personal throughout this battle. Stay focused on hitting her from a safe distance to avoid damage, and if you can finish her off quickly, she may not get the chance to use her EX Skill. Stay sharp, and make this sly Reploid see you're not a mere plaything.

At the end of the fight, Leviathan realizes she's let things go to her head: Elpizo is long gone. All she can do is grin and bear it as she departs, amazed at how strong Zero keeps getting.

Beating Fairy Leviathan at the top-notch A or S Ranks gets you another Z-Saber EX Skill, the EX Skill

+ Saber in the air, and Zero stabs downward with the Saber, effectively tearing unlucky enemies below to smithereens. If the Ice chip is equipped, the attack becomes an Ice element that freezes the enemies it hits. Be careful when using it above lethal traps, because there's no stopping the attack until it reaches the ground.

After clearing the mission, re-enter this area to collect the cyber-elves.

After returning to base, Zero is filled in by Ciel that Elpizo has found the secret code hidden in the Computer Facility. This code, "YGGDRASIL", is a password that opens a door to a place with the utmost degree of security in Neo Arcadia. If the first administrators of the city hid that code so well, they must have meant business about the secret behind it.

The next areas in the lineup of missions are terribly challenging. Comparing the Shuttle Factory to the Crystal Cave, Crystal Cave, Sage Harpuia's territory, doesn't have as many risks, but a lot of confusing traps. It's a good idea to go there, but the task of getting through in one piece is a game of good memory...