Helpful Tip:
Think about the

Ultimate Form and use as many cyber-elves as you want, especially between missions.

Ciel reverts to simply asking if you're ready to go to the temples as they come. Not much else happens at this point of the game.

The first temple standing in the way of Yggdrasil is the Temple of Flame. It's chock-full of the three "M's" of mayhem: magma, Mechaniloids, and mighty, inhuman protection. This could very well be the hardest area of them all. The layout is easy to remember, but the time limit is the real clincher. If you have Active Form, switch to it: survival's all about speed in the Temple of Flame.

Beware: this is a do-or-die mission! If you die at any point before the boss, you will have to start the temple all over again!

The entrance to the temple has a couple Pantheon Guardians to get you warmed up for the real razor-edge difficulty up next.

After you pass through the temple door, it shuts tight. You should actually stay in the open doorway and wait. Tellybombs are continually deposited from chutes in the room. If you'll look to the right, you there's no way out! Just cracked wall-pillars and magma that can kill. If you remember, Tellybombs can wreck cracked areas. You need to knock a Tellybomb into the upper two cracks to partially destroy the wall. You'll get an improvised platform and enough clearance to dash out to the next blockade. The doorway is the ideal place to smack Tellybombs over to the cracks with the Z-Saber. If you happen to wreck the whole section of cracks, rely on the Chain Rod. Invincibility-abusing strangles your ranking.

Following two more Pantheon Guardians, the same thing happens. Wait for another Tellybomb and move on. Try your best to avoid damage.

Two more Pantheons, one more blockade. Work your magic on a cracked pillar one more time to get through the first area of the Tellybomb-themed challenges. There's four Pantheons to deal with in between while you're passing into the second area. This is where things get rough... REAL rough...

You need to be very accurate as to where you send Tellybombs in this area. If you don't, you'll kill too much time waiting for them to come out one at a time for each mistake.

For the first wall, climb about a little high on the cracks to lure the Tellybomb over, but jump over to the other wall on the left to knock out the wall before it wisens up.

The second wall isn't much of a problem. Climb all the way up the left-hand wall, where the Tellybomb chute is. Lure the Tellybomb slightly up your way, then send it downward with your Saber. It should at least clip the wall. Problem solved.

Perhaps the hardest wall is the third one. You have to worry about two Tellybombs crashing and blowing up in your face. Stay at the small opening here, the only solid platform you can stand on. Try to keep destroying the Tellybombs coming from further away so you can focus on launching the nearby Tellybomb coming down into the wall. Wait just a few seconds for it to reach you, and use Tenshouzan to give it enough force to reach the top.

The final wall is pretty big, so you shouldn't have to take very long getting rid of it, But ward off the Tellybombs get near you from the left. Make a strong dash-jump to land over by the exit below. Don't try to get the Z-Panel; it's a hassle.

With this part done, you'd think it gets easier, but don't underestimate the temple: it's got a few more thrills to whiten your hair.

More Pantheon Guardians stalk the exit. After them, you'll find a dead drop down. The upper half of the right wall has a Top Gabyoall, and the rest of the way down is marked with the maddening Seal Cannons from the last game, sporting a flashy new red paintjob. They always tilt their cannons your way when they shoot, and shift out of harm's way with their thick tank treads. To give them nowhere to run, resort to using Sharp Edge as you drop. Strike the Sealcannon on the left while falling to get rid of one part of the enemy equation. Out of all the enemies that could reappear, the Shaball from the Sand Wilderness makes a comeback. They're motionless in the temple, but they can still open up to rain down bombs. Destroy these posthaste. One awaits at the bottom, with a second Seal Cannon.

Revenge of the past[edit] 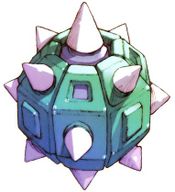 The next area comes to a header, with crumbling platforms over magma. Gli-Eyes sitting directly above pester you as you have to make jaw-grinding jumps. Keep destroying them and running at the same time. Another Seal Cannon is situated to take pot shots at you. Try to use the Erase Form to stop its bullets and slash it. The Shield Boomerang keeps you from dashing.

Now, climb up to find a shutter door. Directly to the left, you'll find a Pantheon Hammer.

Quickly switch back to Active Form for the upcoming challenge. Passing through the shutter brings you to the crown jewel of hateful traps in this temple: a rising cascade of lava!

You have to beat the lava up to the top, or you're doomed! With crumbling platforms, a Top Gabyoall, Gli-Eyes and even Seal Cannon mixed in, prepare for some evasive action!

Quickly scale the platforms over to the right, then zig-zag up the small ones in the middle so you don't collide with the Top Gaboyall. When you get close to the top of the column its combing over, there's a small section of solid ground above. Jumping there is preferable, but tricky. If the Gli-Eye attacks, try to smash it quickly.

Dash-jump to over to the platform above, then the next, and finally, rebound off the last two or leap right to the one above. If you can waste the Seal Cannon, you're golden. You've reached the safe zone where the lava stops. Just eliminate one more Pantheon Guardian in your way, and the Gli-Eye if it decides to trail after you. You've reached the shutter to the boss, which leads to an unusual drop down into a huge hallway below. Guess who's waiting for Zero?

Fighting Fefnir has returned! Fefnir knows Zero's here for Elpizo, but since Harpuia's already going after him, why not fight him instead? Fefnir lets out a war cry for his third rematch, and tells Zero to get ready for a fight.

Fefnir decides to push himself to his true limits, sparking a firey transformation! Glowing ruby red and sucking in mass, Fefnir becomes a mega-sized dragon tank! This is Fefnir's Armed Phenomeon, a super mode with all the gadgets he needs for battlefield supremacy! 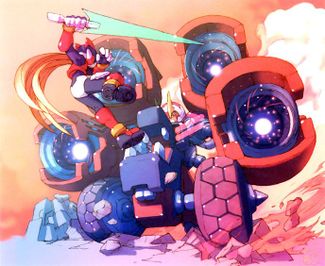 Fefnir has entered Armed Phenomena Mode, a rare transformation that can be unlocked by exceptionally strong Reploids. It causes them to produce massive armaments from their bodies in situations of duress. Copy X had this power, and so do the other Guardians. They use this when all else fails against all odds. In Fefnir's case, it is a new chapter in the book of overkill. Never one to hold back in a fight, he's going hog wild as a front-line combat vehicle that doesn't have to worry about defense. He is all attack, with enormous caliber guns boasting the firepower of a dragon and two vigilant tires that will let him advance upon Zero in a ruthless pursuit with the end goal of burning him to cinders. Dragon Fefnir's sheer size is so great Zero cannot jump over him or move around him from the side. Be prepared to run from the rolling inferno, because you've just met hell on wheels.

Fefnir's got extreme power backing him up from all sides, in the form of 4 dragon head flamethrowers, slithering around on gas-filled cables. There's also a scroll you've got to maintain, because Fefnir is stalking you, ready to squish Zero under his beefy titanium treads. You can damage the dragon heads, but Fefnir won't be hurt unless you hit the only thing that didn't change shape: his head. The Saber bites his health down, but you'll need the Buster as he shunts you away with attacks. Have the Thunder Chip primed for attack. Active Form also helps even the odds, mainly because of its great speed.

Fefnir gets right to work with his dragon heads, launching intense flames bigger than him to force you back. The wide span of the flames makes it impossible to launch a close-range strike without scalding damage. All four heads will ignite shortly before letting loose the flames. Dash all the way to the far left, keeping up with the scroll. These flames destroy your health if you get hit, even once.

Fefnir tries to follow up his flamethrower strikes by spitting two enormous firebombs out the top two dragon heads. They tumble onto the ground and leave explosive bursts when they shatter. Watch where you stand so you don't take a bomb to the head, and with a moving floor, dash over the resulting explosions with care: they're moving your way, too.

Fefnir uses his EX Skill early on, usually after his first two attacks in his pattern. The lower right-dragon head lights up and launches three massive rings of fire in a row towards you, weaving up and down like Golem Type I's icicles. Either try to dash under and over his attacks, or smash the dragon head to cripple it and stop the EX Skill permanently.

Fefnir also shoots fireballs out the dragon heads in a set pattern. It's simply an weaker version of his EX Skill. Dodge with dashes, and attack.

Try not to damage the dragon heads. They each have small amounts of health of their own, but break after multiple hits. If all four are busted, Fefnir goes berserk. He's lost all his attacks, but he resorts to what he has left: endlessly launching annoying fireball waves that make him seem more like Air Man. It's an easy up an down pattern with much smaller flames, but 2 minutes, 40 seconds isn't enough time do deal with it. If you use the Shield Boomerang and throw it continually, you can keep hitting Fefnir without possibly hitting all the dragon heads. Grind his health down gradually, then finish him with the Z-Saber. Final score: Zero, 4, Fefnir, zip!

Sadly, there's no EX Skills anymore. Yep, no more to gain. What a ripoff!

Fefnir's down for the count, but he won't take being beaten sitting down. He makes a stubborn vow that one day, he will win. He leaves the temple to recuperate, letting Zero move on ahead. Ciel sets the coordinates so he can return anytime.

You're halfway to the core of Neo Arcadia. The next temple is the Temple of Ice. It's relatively easier than the Temple of Flame, but riddled with plenty of dangers of its own that you should never take for granted.