The Temple of Ice doesn't create a major hassle like previous areas did, but it's not cut-and-dry. Surprise attacks from the deep and the absurd traps give it the real sense of danger. Watch your step, because you might just wander into the jaws of a Mechaniloid- or worse- spikes. However, all the Cyber-Elves here are in boxes. That makes collecting the group much simpler.

Beware: this is a do-or-die mission! If you die at any point before the boss, you will have to start the temple all over again!

The entrance is surprisingly quiet, maybe because it's below freezing in the temple. Good thing Zero isn't human, or he'd be frozen solid about now.

It's when you jump into the water that you start meeting enemies. A Jangyo is the first enemy in sight. After you dice it up, Yadokroids show up once again. Destroy their shells and finish them off before you receive gunfire. X Form's souped-up bullets work wonders at this.

Up to the left of the main underwater chambers sits an iceberg. On a return trip, try to explore the area and dash-jump up in the water near the iceberg to see a pillar near it. If you can manage to reach the pillar, wall-jump over onto the iceberg. The Cyber-Elf rests in a box on an even higher up pillar. It's hard to see them, but there ARE spikes sticking out from the ceiling, some to the left, and more to the right. Wall-jump onto the pillar and up to the Elf, or try using the Chain Rod while jumping and reel it in to provide a needed boost. Inside the box is

In all, there's only 2 Jangyos and 2 Yadokroids in the first room. You can easily sprint out the room and climb up when you need to. The exit shutter is up a wall off to the edge of the room. Ice at the top can trip you up while heading out of here.

Again, no enemies between rooms. You get a Life Energy Capsule at the end.

The following room is coated with ice on nearly every walking surface, with spikes waiting at the end. Don't gun it, or you'll give the spikes a painful hug. Snow Garms and Pantheon Guardians patrol every area, like a K9 squad gone bad. Waste every enemy you meet, especially the Snow Garms. Their claws let them move on the ice, but Zero can't get much traction to run away.

First, gain some momentum on the first patch of ice and dash-jump to a ladder sticking out from the wall. Spikes below are no prize, but don't overthink this. To grab hold of a ladder, you've got to hold

during your jump as you reach it. Climb up and clear the platform above the ladder with the Saber. Dash onto it, then dash over to the second ladder, or just catch the ledge at the top of it and wall-jump to the top. Take a small jump to the right for an easy Cyber Elf Box that contains

Make a medium jump from the second ladder to the left-side platform. Spikes stick out at the end of this wing of the room, but there's no true risk of hitting them. Dash-jump one last time to reach one more ladder, then jump to the ice patch at the very top. Run down the ice, and then perform Sharp Edge (or a downward Saber slash) and drop straight down, right after the platform ends. Hopefully, you'll land on a tiny ledge and slice up a Pantheon Guardian to boot. Dash over the ladder to the shutter in the corner. There's no need to waste time climbing down, or risk it all for a Z-Panel up top.

Your next task is similar to the rising lava in the Temple of Flame: water is gradually flooding the room. You've got to hitch a ride on a floating iceberg while the water rises. 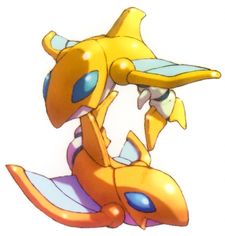 Stick to the center of the iceberg and enjoy the steady ride up. Well, that's what it would be, if not for some fiendish enemy placements. Two Jangyos will keep leaping over the iceberg from both sides, attempting to strike before you know what hit you. Use the Active Form's mid-air Rolling Slash each time they come near you. Just keep making sushi for a while. Don't fall off the iceberg. You could drop to your death, impact into spikes, or fall off and not be able to get back up.

Soon, Yadokroids begin to pile in from left and right. Smash them with charged Z-Saber strikes, or quick-hitting slash combos. They threaten your damage count more than anything else. When two show up at once, try jumping over the one that has to scurry over to you for some quick revenge.

Somewhere in this area is a Cyber-Elf Box over to the left on a ledge. So you don't blow the mission, come back for it afterward. Jump over to it when it comes within range and free

Finally, the water levels off at the top of the room. Dash-jump and exit.

The last area proves to be the hardest, mainly because of horrible amounts of spikes. Start dashing from the moment you enter the room, and dash jump to the iceberg. Spikes below will seal your fate should you screw up. A Yadokroid also adheres to the ceiling nearby. Smash that crab posthaste. Dash off the edge to the ice over to the right and get through the lower passage without getting hit by Jangyos. Take care crossing another spike pit. As long as you've got enough momentum, you're fine. A Z-Panel also rests up at the far northeast corner of the room. You have to make a jump for it.

At the very end comes the most unwelcoming trap of the temple. You have to make a dash jump of the edge of the ice where the platform ends, and then snap to the left and hug the pillar. Any mistakes are fatal. Jump too slow, too fast, or too far, and that's it. The Chain Rod won't be of any help either. Pass through with the uttmost caution. Wall-jump on the pillar the rest of the way up. The spikes line the entire wall to the right. When you reach the top, dash-jump off the side to clear all the bloodthirsty traps, and reach safety. Stay sharp- a Yadokroid is waiting for you. It has a good chance of fleeing in this big room.

Dash all the way to the end of the ice and jump, holding all the way to the right. You should reach the bottom of the room without meeting a second Yadokroid trying to box you in. Go through the shutter, and you've reached the location of the boss.

Leviathan is waiting for Zero with a sly chuckle. She thinks she's just as bad as Fefnir. She doesn't care so much about the Dark Elf as she does giving Zero his fair share of beatings. She's ready to fight, and in this big room, she's got the advantage. The Baby Elves supplied her with a power boost and the Dark Elf has bolstered her urge to fight. This has helped her will about a transformation.

With a shiny blue glow, she morphs into her Armed Phenomena Mode. The chilling beauty has morphed into a beast more suited to her name- a manta-shaped submarine! 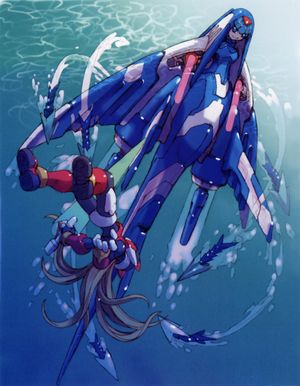 Leviathan looks like an outright monster now. She's definitely tougher coming into this fight, and with an icy floor, this fight could take a while. The Fire Chip is all you've got, plus Z-Saber charged attacks.

Leviathan always starts the fight by backing away and charging in, spinning like a bullet. Dash slightly left and then dash-jump right to dodge her massive wingspan. She dashes whenever you fall out of her range, forcing you to stay near her.

Leviathan isn't always moving. When she stops, it's just to launch a wide-range ice attack. Her attacks are marked by her glowing helmet crystal. If it launches a laser-like blast, sharpened snowflakes will rain down all over the room. Smash them before they reach the floor. When they land, they become sharped ice blocks that start floating back up. Fire-attacks will clear away the falling ice.

If Leviathan's crystal starts charging up, she's about to launch a savage version of her trident attack. Several spears of ice will fly out, and you'll need to run away, but with the icy floor, you should run immediately.

Leviathan's Freezing Dragons also show up again. This time, there's two at once. Both chase after you quite a distance, and they try to reform into a cage for Leviathan to box you in. Hit them with Fire-attacks a few times so they don't corral you. If you're caught, you can bust right out.

Leviathan's EX Skill is a pretty dicey one. When her health gets low, she launches a force of piranha-shaped torpedoes after you. Like all torpedoes, they explode on impact. If you evade them, they'll try to circle back and make another pass. They're easy to smash, but not easy to miss.

Keep battering Leviathan with the Z-Saber at will. She's tough, but no problem for those with experience. She should go down quickly.

Leviathan isn't happy with her loss. To her, it feels like she's getting sloppy. She's got a boring life, so combat is really all the excitement she gets, and it's a serious thing. It's like a letdown to her to lose over and over, so she dreams she will destroy Zero. Leviathan leaves with an air of mystery about her.

You've made it this far, now what? There's one last temple to explore. It's the Temple of Wind, and it's actually the easiest. It's also the lengthiest. Get set for some more hardcore action... Elpizo is near...