How to enter
Like the statues in the 0 stages, the entrance can be shot as well. Shoot the entrance until a platform appears before the door, shrinking the distance that you need to overcome to something that you can leap over.

Watch out for the floating heads as you progress through the entire area. If you're interested in getting the fireball ability, follow the path you start on to the top to reveal a lotus blossom from the tile. If you collected one, or the card weapon, from the previous stage, you can start out by heading right. A heart can be found in the left of the two center tiles, and a mystery square is hidden in the lowest tile on the right. Four seals can be revealed on the right half, and the book will appear nearby.

Collect the mystery square hidden in the tile above your starting location. Then make your way to the right. There are a total of eight seals hidden in the tiles in the center of the room, and you must reveal all of them to escape. In addition to these tiles, there is a standard weapon hidden below the door, another mystery square on the opposite side of the room, and monk beads near to the second mystery square. If you have the card weapon, it is a good idea to hold onto it, although you will have an opportunity to collect it again in 2-4.

From the beginning of this room, you must advance to the transforming tiles up above. You must time you leap on to those tiles when they are in the process of becoming one solid tile again. As soon as you jump on to the center tile, make your way to safety on the right. Follow the path to the right and back down to the tiles below. There are several tiles worth investigating here. A tile in the upper right corner has a heart, and another tile along the bottom contains a red orb that will briefly clear the room of enemies. But most valuable of all is the small island tile which contains an extra life icon and should not be missed. There is only one seal in this stage, and it is on the center of the little cross island towards the left. It can only be accessed from the right. Reveal it, collect the book, and advance to the next room.

From the start, advance to the center of the formation of tiles. Jump on the center tile to reveal a valuable potion that will restore your life. There is also a mystery square to the left of that. To reach the right side of the room, you will have to advance along the bottom of the center of the room, but all you will find on the right side is a card weapon, which you should collect if you don't already have it. Back in the center of the room, the four isolated tiles all contain seals. However, the book will appear on the opposite side of the room. You must make a bridge appear along the column of tiles where the flame jets appear. To do this, you must kill a certain number of red robed wizards. Once you do, the bridge will form and allow you to cross over the water to collect the book. 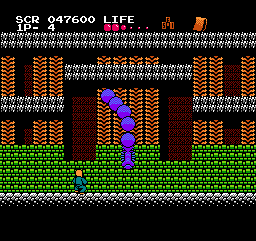 Watch out for the head

The dragon boss of area 2 is easier to strike without being attacked than the Buddha head boss from the previous area. However the dragon can be harder to hit, as it flies around somewhat randomly, and can only be damaged by hitting it in the head. Any attacks that hit its body are absorbed and canceled. Occasionally, the dragon will dive down in an effort to grab you. If it hits you, it will carry you up the screen a short distance and drop you. There is no major strategy to defeat this boss. Stay on the opposite side of the screen in order to avoid getting hit, and focus your attacks on its head as frequently as possible.